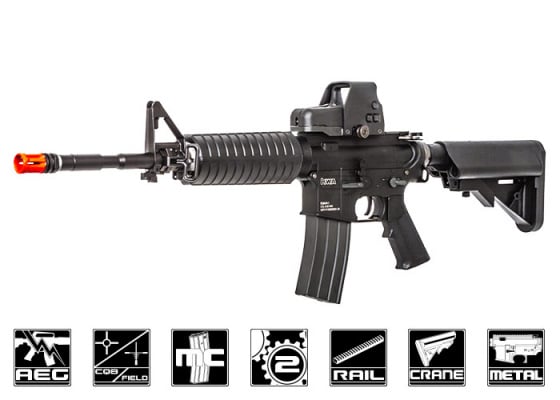 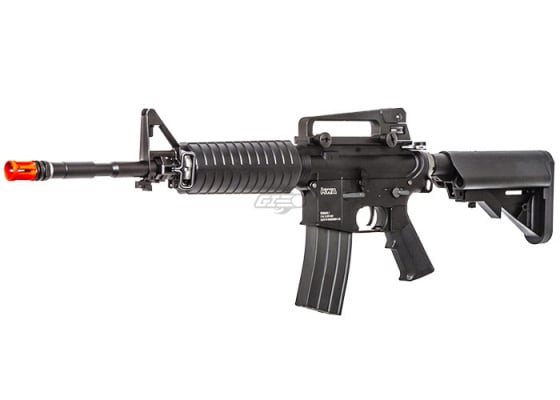 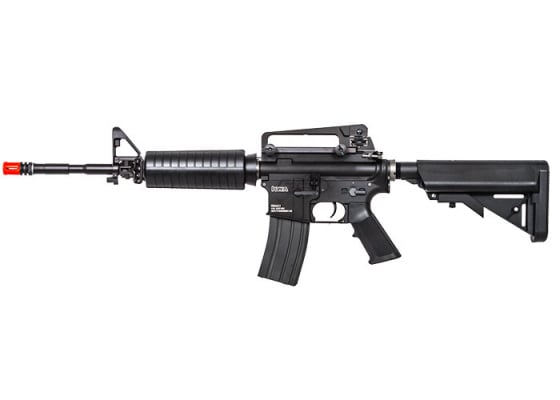 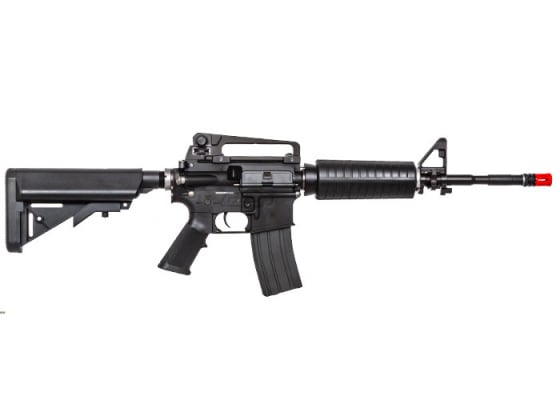 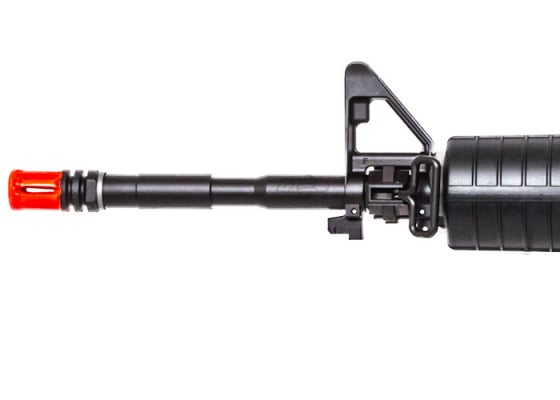 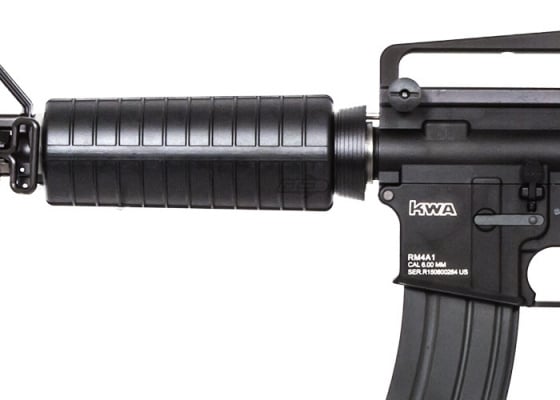 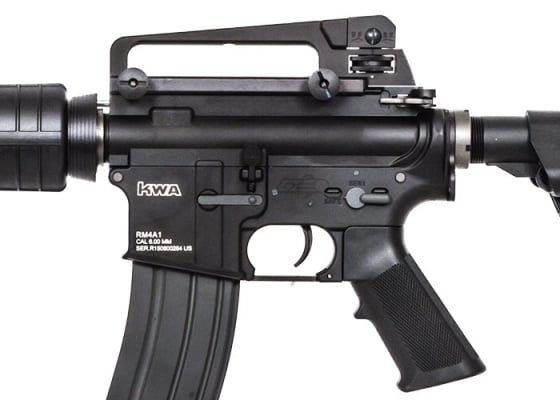 ( 3 Reviews ) ❤ Add to Wishlist
Excluded from Coupon Codes
OUT OF STOCK
(notify me!)
Free Shipping for orders over $89 No Coupon needed

KWA is a well known airsoft manufacturer that has been creating high quality airsoft guns for some time. From airsoft electric guns to gas blow back airsoft guns, Engineered to Outperform, defines the quality of their products. Externally, the material they use is designed to withhold a serious amount of stress giving the gun the utmost durability. Internally, the parts used in their airsoft guns are matched to the highest degree for the smoothest operation over long periods of operation. Overall, their product truly performs on the field, KWA products stick to their motto, Engineered to Outperform.

The AR15 was originally designed as part of the U.S. military's initiative to develop a lightweight and smaller caliber weapon as the standard infantry rifle. This innovative weapon utilized aircraft technology to lighten the rifle's overall weight. This led to the creation of the M16, which has served as the backbone of the U.S. Military for more than 40 years.

The KWA RM4A1 ERG is an AR style, Electric Recoil Gun [ERG] that utilizes the patented Kinetic Feedback System [KFS]. This gives the user felt recoil with every trigger pull. All ERG Series rifles feature a mechanical/electrical cut-off system that works in conjunction with the ERG magazines to feed every BB and stop firing when the magazine is empty. Highlighted features of the RM4A1 ERG are metal alloy receivers, MilSpec buffer tube and stock, a flat top rail, which allows operators to customize their weapon configuration, and an operational bolt catch feature that provides the user with unparalleled realism by mimicking fundamental AR15 weapon manipulation. Similar to real AR15 style rifles the RM4A1 ERG's modular design allows limitless customization options to best suit the individual's training and MilSim needs.

R. ANDERSON | 2016-04-13
Product Information:
This gun is heavy if you are playing all day, eats the 11.1 Lipo in about 2.5 to 3hrs shooting in both semi and full auto. If you buy this gun get two 11.1 Lipo Batteries if charging is an option at the field, if not get more. I have had no problems hitting targets at 150 feet and its a blast to shoot. There are not a lot of reviews on this gun or videos so I figured I would type one up. Some Mags that are not KWA have a hard time fitting into the gun so test them out at a store before buying or be ready to send them back. Overall I am happy with my gun, I have played with it for about 9 hrs of play time and shot just under 10,000 bbs without any problems. If you are taking off the orange tip, get a small Allen wrench remove the screw then heat with hair dryer for about 5 minutes after that loosen with a wrench, this process will more than likely damage the metal orange flash suppressor so painting it will not cover the damage, be ready to buy another flash suppressor. My gun was shooting hot out of the box (over 415) so watch out for that.

Pros:
-Fun to shoot
-Accurate out of box
-Solid constriction
-Shoots hard right at 400 fps out of box

Cons:
-Heavy
-Burns through battery 11.1 Lipo buy a back up or two
-After market Mags don't always fit, some are hard to get out once in the gun.

verified buyer
A. SICKING | 2018-02-03
Product Information:
For the most part, its a cool gun with some cool features, but when i received mine i was presented with a very glitchy piece of equipment that i was never actually able to use. the electric cut-off system proved to be very upsetting as it always seemed to interfere with the operation of the gun never working for more than one or two shots at a time. these few rounds only being fired after several minutes of doing just about everything that one can do to fix a gun on the spot. I spent $300 on this gun and was very excited to receive it hoping that I could use it on the field for a few years before it finally just worn out. I've only been met with disapointment and aggravation since i first pulled it out of the box and after having it for at least year, I havn't been able to use it once. there have also been several other features of the gun that seemed to be broken from the start, all of which are also on the verge of unrepairable unless I replace literally the entire internals of the gun.

Cons:
very heavy
incredibly unreliable
because its KWA, not very compatable with any "foreign" parts

S. TAYLOR | 2018-07-14
Product Information:
My son bought this rifle and this is what he had to say: The KWA RM4 is a beast! I love the realistic mag stop, the ability to change the magazine's round count along with the need too hit the bolt paddle after every mag. The externals are all tough, and i mounted an aim sports ris system to the delta ring with no modifications. Despite this i made the mistake of trying to remove the orange tip without melting the glue and ended up shearing off my threads and the orange tip, so that'll be repaired through gi soon. I've hit quite a few 100 foot+ shots and found that under 70 feet you'll be accurate and able to hit your targets quickly. Be careful buying lipos though, you need an 11.1 to get the right experience out of the gun.

Pros:
Great training tool.
Realistic manipulation.
Accurate.
Recoil is certainly felt, but most prevalent in full auto.
Modifiable just like any m4. And as per usual it's rear wired.

Cons:
The barrel glue is wayyy too strong.
Fps on mine clocked in at around 330, wishing it was closer to 380-390.
One battery will die before the end of the day, bring two.
It's not often but sometimes the follower on the magazine won't engage the bolt stop. Then you just have to reload like a normal aeg.
Search Tags: M4 Field Carbine Retractable Stock High Capacity M4A1 ERG Kinetic Feedback System Realistic Recoil AR15 AR 15 AR-15
People who bought this item also purchased:

Talk about the KWA RM4 A1 M4 Carbine Recoil AEG Airsoft Rifle (Black) with your friends on the facebook comments box below: