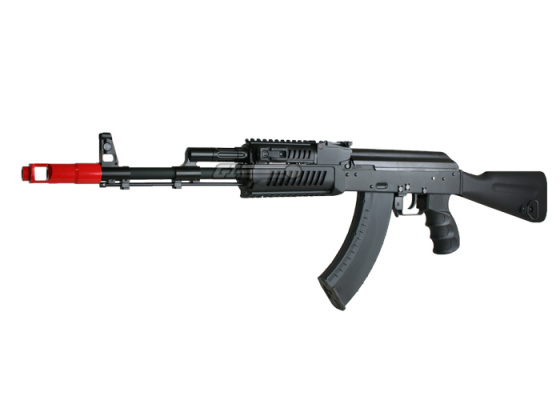 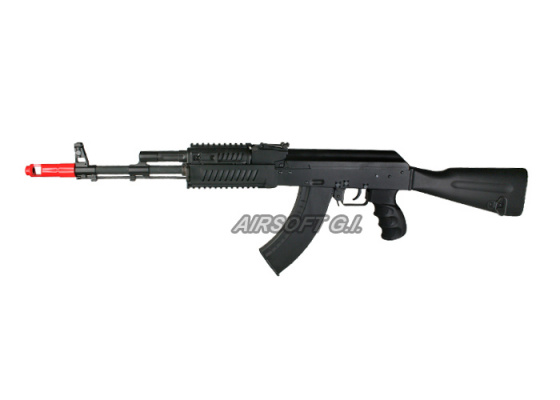 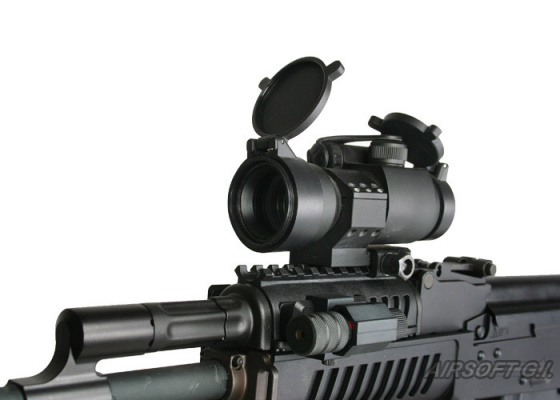 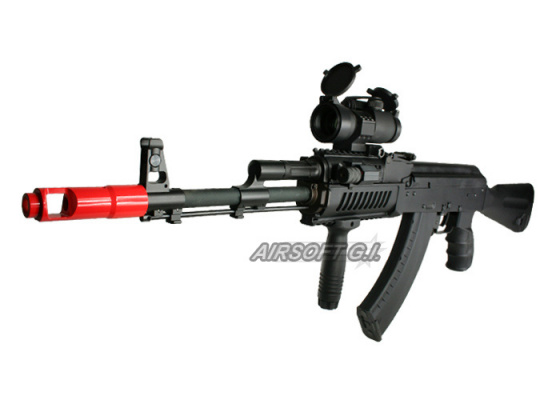 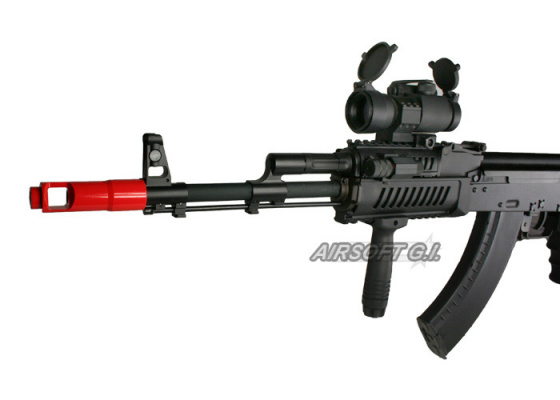 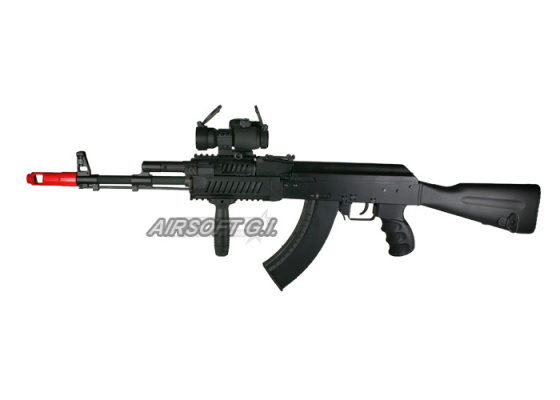 ( 6 Reviews ) ❤ Add to Wishlist
Excluded from Coupon Codes
OUT OF STOCK
(notify me!)

The AK-47 has been used successfully by military forces worldwide for years and has spawned a whole line of different models. The RK-103 EVO is an upgrade upon the latest designs of the Kalashnikov series of assault rifles. The traditional wood stock, and grip have been replaced with polymer ones. Also, the handguard has been replaced with a sturdy polymer rail system capable of mounting optics, lasers, and vertical grips; ultimately making the traditional AK more versatile and usable. In addition to that, the RK-103 EVO has a realistic take down procedure, unlike many of it's competitors. The RK-103 EVO is the next generation AK, and it's available now!

verified buyer
A. MUNROE | 2009-02-11
Product Information:
From what I've been told, this is a great gun. AGI got it to me in one piece and very well packed. Was able to fire about 20-30 shots in semi auto before a nasty grinding noise and no bb's were coming out. Upon stripping the gun down and taking the mechbox apart I found that the sector gear on the lower half (most teeth) had 2/3 missing teeth. Upon further inspection in the mechbox I found the teeth, they had cut CLEAN off the sector gear itself. Not stripped or milled down but cut clean off.

Now whether I just happened to get a lemon remains to be seen. Cannot do warranty due to stripping the gun down and would not do it anyway due to the fact that it's just this one gear. More than likely the gear itself was defective or G&G failed to shim properly (some mention that you should pop the box, reshim as necessary as well as grease it up).

All in all I am sure this is a great gun once I fix the broken parts, although it looks like G*G might not have worked out all the bugs in their quality assurance dept. For the new people I'd suggest sending it back to AGI for Warranty or paying a dealer to work on it if it breaks as the Mechbox is a fairly tricky beast to deal with, (Keep track of those small parts!)

Pros:
Great looking gun
Feels almost as heavy as my real AK47 without the 40rnd magazine in it
Good balance with a battery in it
Stock is fairly large, will fit a 9.6v 4200MaH battery from ShortyUSA but tightly (crimps wires)

Cons:
Sector gear teeth were cut clean off, looks to be a defect in the gear
For RMA/Warranty, requires to send ENTIRE gun back.
Piston teeth also look chewed up which disappoints me as G&G is supposed to have great internals
Removing the compensator seems to be impossible without tapping out the pins that holds the whole Front sight block on.

M. VANDERGRIFF-HUGHES | 2009-05-17
Product Information:
I received my RK103 EVO in early January of this year and just have not been able to get around to writing a review for it. Words fail in describing how incredible this AEG is, yet I will try. Taking this behemoth out of the box, one sees how realistic it is. At 7 and a half pounds in its stripped and empty configuration it almost perfectly mimics the weight and balance of a real AK. Having a full metal body ensures a beautiful external appearance and amazing durability you will not see in plastic AK's. The RIS is plastic, which a positive thing because it is still very durable yet far lighter than a metal RIS, and would probably ruin the balance. Ergonomic pistol grip is a much needed improvement over the smallish and non-friendly generic AK grip.

Accuracy wise, it is an excellent field weapon, managing 5 inch or less groupings at 80 feet with no upgrades, accuracy is still excellent to 140 with proper hop up and ammunition; I can only imagine what it could do with improved internals.

Rate of fire is a moderate 700 or so with the battery that comes with the RK103 starter package; nice and stable ROF that does not waste ammo and still puts enough down range to do the job. Mine came at 370 out of the box but has settled down to about 325 fps with .20 with the spring broken in. Reliability wise, its ridiculous, besides the usual cleaning and maintenance I have never had a single incident where the gun was at fault for a misfire, just nearly depleted batteries or misfeeding magazines.

The realism is so complete that G&G has perfectly replicated the AK sights. AK sights do not have the capacity to account for anything but range, its not the fault of the gun, its just the way AK sights are.

I advise people who purchase this gun that the flash hider/ compensator is rather permanent. DO NOT TRY TO REMOVE IT YOURSELF! This will cause the front end to become wobbly and less accurate. For people wanting to put something else there, tell ASGI to remove the flash hider AND the 22mm thread, then to screw them both back on to meet legality requirements. G&G has put nearly indestructible glue on the 22mm thread that holds the compensator on and in the space that holds the 22mm thread onto the 14mm standard thread.

Other than this one small problem this gun is flawless, if you are looking for an AK AEG with great baseline performance, excellent upgrade and accessory potential, this is your gun.

Pros:
Everything but the "permanently glued" muzzle compensator

Cons:
Compensator is permanently glued on unless you know how to remove it safely without damaging or loosening the barrel or the front sight.

C. GUAN II | 2011-07-12
Product Information:
The previous reviews, particularly the one by M. VANDERGRIFF-HUGHES, were very comprehensive. I do have some more points to add based on my experiences:

The stock is a little bit longer than traditional solid AK stocks. This is probably so you can fit up to a large-type stock battery. It will feel a little bit awkward especially if you are of a shorter height but this should not be too much of a problem.
This AEG comes with a black bakelite hi-cap magazine. It feeds very well and feels great. It also fits snugly in to the magazine well so there is no wobble. I have also tried CYMA and ECHO1 AK 47 and AK 74 magazines on my gun. They do fit but it is VERY tight. If you are willing to risk breaking either your magazine or the magazine well just push it right in until you hear a click. Hopefully this means it's secured and not that the plastic cracked.
I got my gun at the Airsoft GI walk-in store so I can test-fire it, simply to make sure I don't get a lemon. The receiving dock/chrono station was unavailable, however, but since there was a quality assurance certificate that said the gun shoots at 360 (the exact FPS I needed) I decided to buy it without getting to try it first. But when I finally got to chrono my gun it only averaged at around 320 FPS. I guess this is a pretty normal drop after the spring got broken-in. And 320 is actually still decent for my standard. It would just have been less of a shock if the broken-in speed was the one that was noted on the QA certificate.
The picture on this website shows a completely blaze orange compensator. Do not let that turn you off because the actual gun only has a about a one inch orange tip.
It has been mentioned in previous reviews... the compensator IS fused to the front sight! I wish I had known about this before I tried removing it. After the usual steps didn't work I got frustrated and tried to force it off. Bad idea because that loosened both the barrel ang the front sight. I fixed the barrel but the sight might have to be replaced to make sure it sits securely again.
One of the last steps of field stripping requires the removal of the barrel cleaning rod. But because of the compensator issue it is impossible to do this in the conventional way. Getting around this is not too hard to figure out once you get there, though.
I highly recommend this AEG to those who want an AK but feel the need for the modularity of a rail system!

Talk about the G&G RK 103 EVO AK AEG Airsoft Rifle (Black) with your friends on the facebook comments box below: