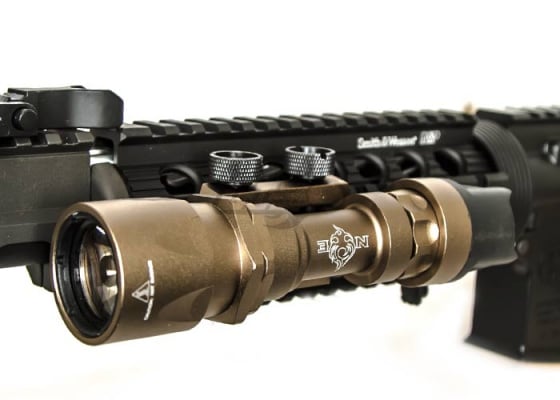 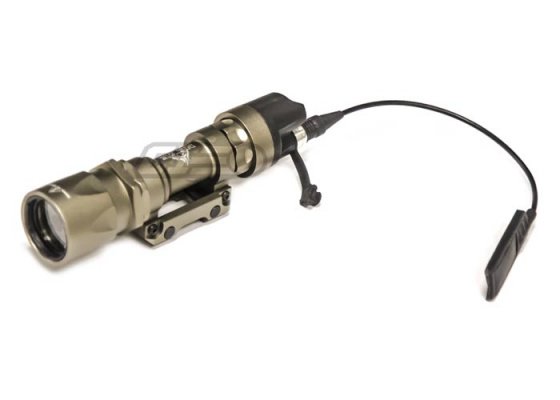 If you're competing in an outdoor airsoft environment in the early morning, late evening or in the dead of night, you need a flashlight for your weapon. A mountable flashlight will give you the ability to see terrain and targets and will also give you a chance to momentarily disorient your opponents. When choosing a flashlight for your rifle, you'll want to consider several factors, including brightness, durability and ease of use. The Airsoft Super Tactical LED Flashlight from Bravo has all of these attributes and more.

Equipped with an extra-bright LED bulb that generates 180 lumens of blinding white light for more than two hours on a single battery, this flashlight brings best-in-class brightness and visibility to any arena. The LED bulb in the Bravo Airsoft Super Tactical LED Flashlight not only shines brighter than incandescent bulbs - it also lasts longer and emits a better color temperature to promote heightened visibility.

The Bravo Airsoft Super Tactical LED Flashlight is made of rugged anodized aluminum and O-ring sealed to prevent water or dirt from getting inside the light. This makes it a great choice for even the most demanding outdoor environments. The Bravo Airsoft Super Tactical LED Flashlight features thumbscrew mounts that will securely attach to many 1913 Picatinny rails. It is powered by two CR 123A or a single 16430 battery. Order yours in a tactically-specialized dark earth coloration here at Airsoft GI today!

A. WOODARD | 2014-03-25
Product Information:
One of the best flash lights you can get.and fo4 a decent price you get such a high quality light I would exspect it to be around $100nothing bad at all....

Pros:
Bright and ruggad.look awsome on a lot of guns

Talk about the Bravo Airsoft Super Tactical LED Flashlight (Dark Earth) with your friends on the facebook comments box below: