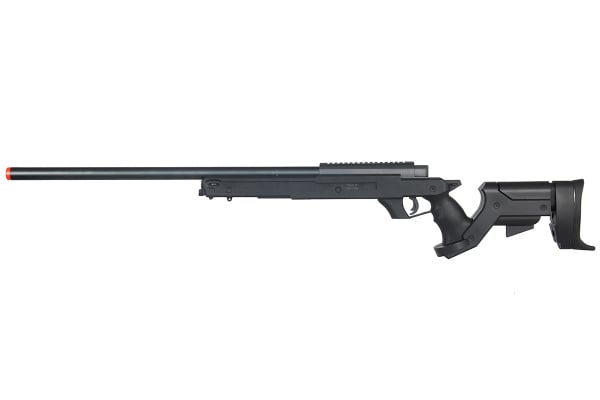 Borrowing its designs from modern lightweight precision rifles, the MBG22B is crafted with the modern shooter in mind, which makes your job on the airsoft field that much simpler. The stock is made from plastic, which makes the gun extremely light for its length. The outer barrel and top rail are metal, ensuring durability and making attaching optics secure and simple. On top of this, the gas action of this rifle makes the bolt smooth and incredibly easy to cycle, which drives the potential of faster follow up shots even higher than other rifles. Most gas rifles are extremely pricey, but Well has brought down their price without compromising their quality. This is the perfect rifle for those looking to enter the world of gas sniper rifles without breaking the bank.

verified buyer
J. DECKER | 2017-07-28
Product Information:
Great rifle, and to answer a commonly asked question right off the batt, yes, it is green gas (propane). The gas is actually loaded into the bolt instead of a clip which I find a nice feature. With this rifle i'm hitting targets at 175ft with no problem and passing the target when I miss for a range of close to if not 200ft, and thats out of the box no upgrades added as of yet. The gun comes with the sling, one twenty round clip, speed loader, extra fill nozzle, and some replacement orings, no scope and no bipod (of corse). The weight of the gun and the description give are two different things and not because they lied, but because even though the rifle without scope or bipod is 8lbs its not as light as it sounds. It has the same weight and feel as a real rifle, specially with a scope on it. Now if this is suppose to be light weight then I dont see anyone ever using anything other than this rifle, because it would be way to heavy to run with lol. This rifle is beautiful in person and the images dont do it justice, and once a scope goes on it wooo wee is it a good looking weapon. I personally really like it and think its perfect weight and size for me, and im 5'8 140lbs and though im not a sniper i cant wait to get in field with this thing. Then why a sniper rifle you ask, "Because a collection just isnt complete without a sniper rifle, and besides one should be well versed in multiple areas to help the team at every angle. You will never know when your called apon to fill a spot you dont normally take").

Before I move to pros and cons I wanna talk about power of this rifle. It deffently does have power. Frist it slings .20's like there.12's so i deffently recommend .28's at least. When I first shot this gun it was flinging .20's every angle but straight (like a hot rifle barrel), and took me a friday night, sat and sun to fully get it figured out. It will shoot straight dont get discouraged. What I had to do to get it dialed in to .20's is to turn down the hop-up system all the way down to its lowest setting (turning allen key to the left until it stopped), I was then able to shoot then adjust back to the right by a 8th of a turn at a time untill as stated above Im reaching known connections to target at 175ft easy with .20's (Took me the weekend to get it right hopefully that saves you a lot of time).

Now back to power. PLEASE DO NOT shoot at any one closer than 45ft, especially if they do not have protective gear on. This rifle will go through a glass beer bottle at 15ft one shot with .20's, I shot a plastic water bottle full of water from 15ft and it went right through the front side of the bottle and fell to the inside bottom of the bottle.

If your tryiing to figure out if you should go spring or gas, well in my personal opinion Id take this rifle to a competition, but im going to break it down right here in a easy to see means. Spring is the same FPS every shot every time and you wont have to carry unnecessary gas around. Though there a lot of things that govern how your round flies, spring can be a great choice. Now with that said, gas usually has higher FPS and I'm not disappointed in this rifle, but its fps can varry for different reason other than the common Issues of the elements (as explained in cons) . None the less im still very satisfied with this rifle and I would recommend it to others. Its my first green gas buy and wont be my last because its distance and accuracy are damn good and with a hop-up system and/or precision barrel upgrade (if they make them for this, dont see why not) I'm betting this would be a feared sinper rifle on the field.

Pros:
Gas operated, fills at the bolt, and can get one and a half clips off with one fill of the bolt thats two 7sec bursts per fill, may even take more i dont know havent really tried. At 20rnds a clip thats good. If they make a 40 round clip for this rifle that would be amazing because with a small can of green gas and 2 40rnd clips youd be good the whole match period and traveling light.

Realistic look, weight and feel. (No lie, was at the pawn shop 3 days after receiving this airsoft rifle and I saw the real version of this rifle looked just like it in every way. Never before have I seen this rifle until now real or not...very ironic and coincidental)

Distance out of box, im doing as stated above 175ft easy and going farther when missing what im shooting at. With the hop up system and set up for farther shots im sure you can hit past 200ft out of box. What I mean by that is when you adjust you hopup a little high for .20's they will curve up once 15ft or so from the barrel, but holding its line come back down in such a way you get a really long shot, so if you had it tuned to shoot distance then I think it wouldn't disappoint you for out of the box specs, but still I recommend .28's or higher for this rifle lol.

Trigger pull.....can you say OOPS! LMAO for real its amazing, so easy to pull and very smooth. Nice out of box trigger.

Stock has built in cheek riser.

Shoots until its out of gas completely. It will keep shooting straight and good distance until its last breath, though once you get use to the rifle you will learn the signs when its telling you its almost out of gas. FPS does drop a lot in the last few shots.

Cons:
Its gas operated, LOL, I know I know "you said that was a Pro", it is but its also a con. I'll explain, as you shoot your rifle, smg, gbb pistol, whatever, your gas is expanding in your gas reservoir which will drop your fps shot for shot along with the depletion of the gas itself. If its cold your gas contracts, if its hot it expands, both will mess up FPS and how your weapon performs and holds gas. (I have played around with this thing on a 98 degree day here past couple days and I havent had any problems) Leaving your green gas or propane out in the heat will affect the way your weapon fills and how much can go in there. I found that when I keep my gas in a cool enviroment I can get more into the reservoir causing better and longer function of my weapon.

Last shot is a double shot. (50/50) when I come to the last two shots it loads them both into the chamber and it shoots two rounds at the same time. I dont know why, im not pulling back on the bolt more than once per shot its just something the clip does more than the rifle but I felt it should be stated.

Other than that I honestly really can't find any cons about this weapon at the moment. Ive had it for a week now and have shot it every day after work a lot and ive had no issues with it other than the 50/50 double end shot but i dont really mind it...until it ruins an important shot for me lol.....

Talk about the Well MBG22 Bolt Action Sniper Gas Airsoft Rifle (Black) with your friends on the facebook comments box below: