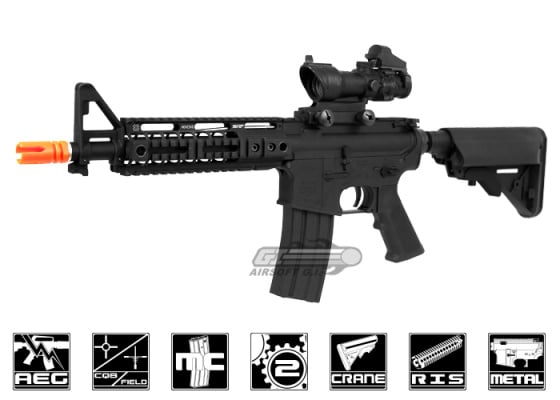 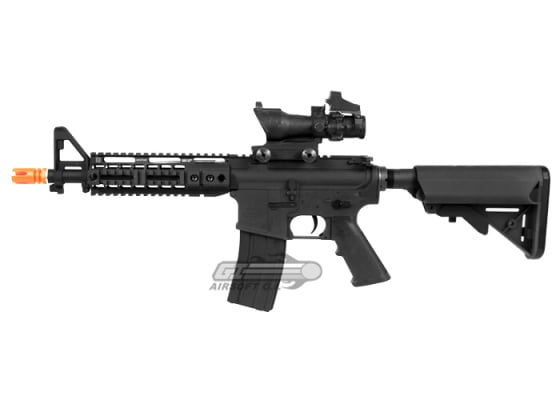 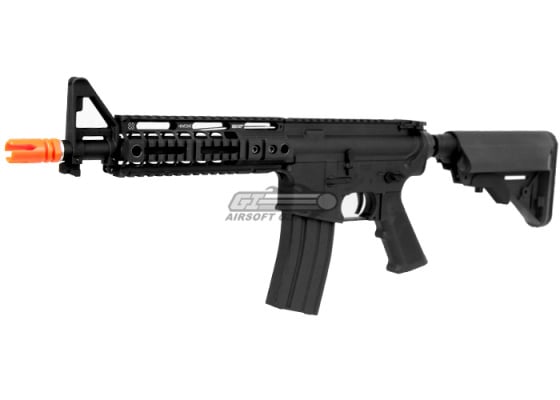 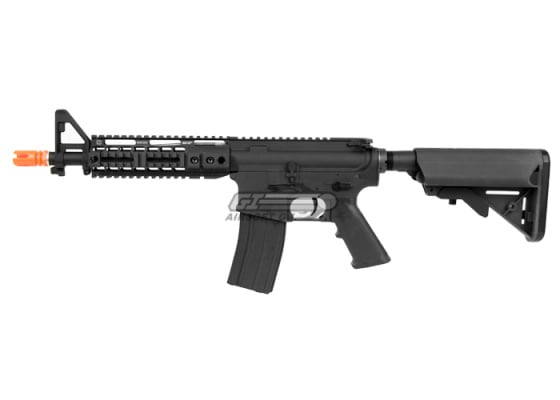 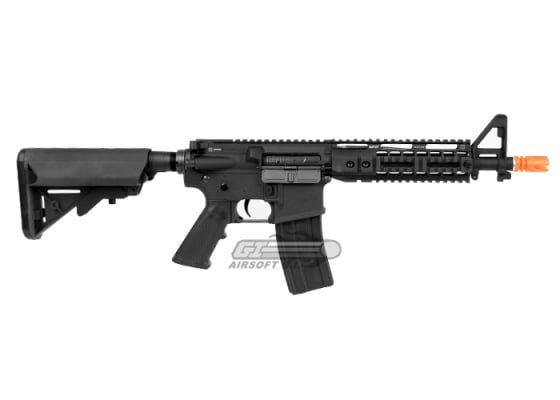 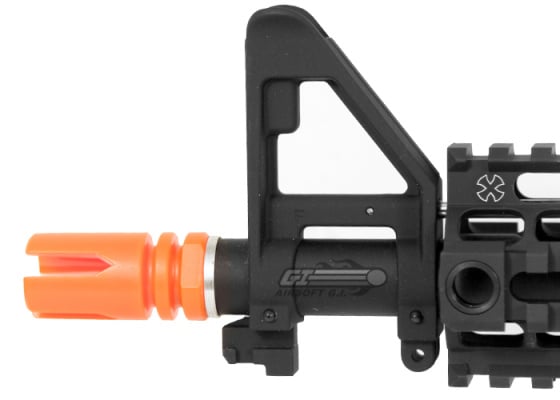 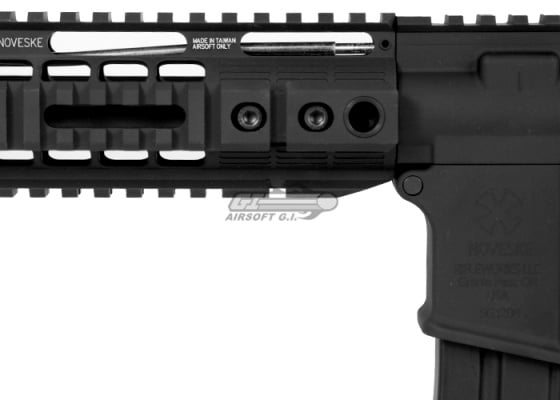 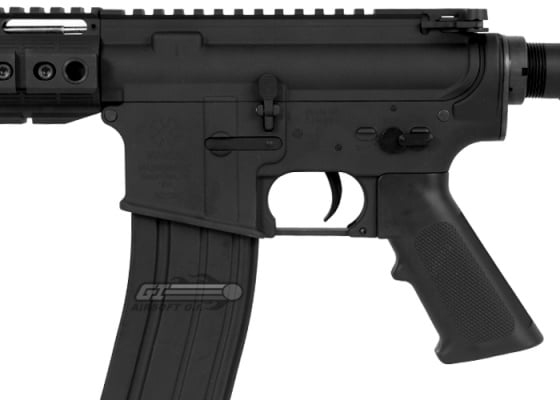 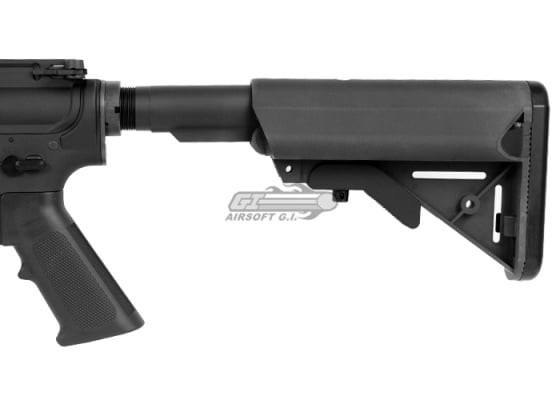 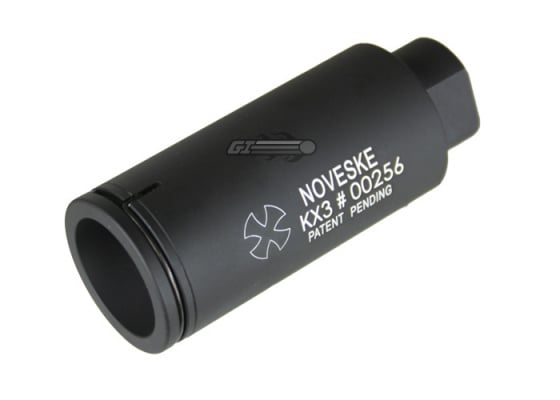 The SOCOM Gear Full Metal M4 Noveske 7.25" Airsoft Gun is an absolute work of art. The full metal body boasts cast Noveske trademarks that make it look incredible. Attached to that is a Noveseke rail that provides ample rail space for the addition of vertical grips, lights, lasers, or other accessories. The airsoft gun also features a barrel-mounted triangle front sight, six position adjustable crane stock, and functional bolt catch that when opened, reveals the hop up adjustment, as well as a Noveske KX3 amplifier that finishes off the look very nicely. Overall, not only does the SOCOM Gear Full Metal N4 Noveske 7.25" look amazing, but it functions equally as well.

verified buyer
K. MCCABE | 2012-08-19
Product Information:
Picked this gun up after getting tired of waiting for a KWA SR7, and I couldn't be happier. The externals are absolutely flawless; the entire weapon sports a nice matte black finish and laser etched Noveske trademarks which stand out nicely. The gun itself is about 7 pounds and feels incredibly solid. There is no wobble AT ALL anywhere on this gun (with the exception of the crane stock, but that's to be expected with most airsoft guns). The rail system and how it connects to the gun has a lot to do with this. There is no delta ring. Instead, the ris is attached to the upper receiver with 6 heavy duty hex screws, which makes both components feel like one solid piece of metal. These hex screws and the sling mount points on the ris actually help to break up the monotony I find on a lot of other rail systems. This could be either a pro or a con for you. Personally, I like how these aspects make the rail look. They're original and give the weapon character. Looking at the pictures, some of you might have noticed the chrome gas tube that protrudes out of the upper receiver and bends down towards the front sight through the ris. I was worried about this when I ordered the gun. Although it adds to the realism, personally, I think it detracts from the overall look of the gun. Have no fear however, all you need to do is pop off the flash hider (unscrew the hex screw, dip the barrel in very hot water, and twist off with pliers. I like to plug the barrel with a cloth that can be easily removed so that steam doesn't get inside the gun) and the front sight (unscrew the hex screw on the bottom and pop the two pins out that secure it to the outer barrel... you'll want to nail the mounded side not the flat side of the pins). Once the front sight is off, there is a final pin securing the gas tube to it. Pop that out and you're done. Ugly, shiny chrome gas tube gone. The chrome o-ring on the front of the gun behind the flash hider also comes off easily. It's not secured to anything. The kx3 it comes with is fantastic. Even though it is not the adjustable version, it is set to the loudest setting the adjustable goes to (closed vents), which is really the only one you need.
It's solid metal and the trades are beautiful. This gun doesn't have any sling mounts, which was upsetting. It took to the one I bought well though, and was easy enough to install. The crane stock is a crane stock. The vfc ones has a nice texture on them though.

Internally, the gun has vfc internals, which are okay. The gun has a great rof with a 9.8 and decent trigger response. It is extremely accurate once the hop up has been adjusted. Once I bought a rear sight for it, I put it on and the gun was already perfectly sighted. ASGI chronoed the gun at 413 (with .2's I assume), which is a bit hot for most cqb places. After firing a few hundred rounds through it to break the spring in and chronoing it myself, the gun was shooting 348 with .25's. Perfect. Occasionally, the gun jams up on semi. It happens. When it does, you'll have to switch to full auto, fire, switch to safe, then back to semi. It happens, but not enough to hinder the rest of the gun.

Overall, I would give this weapon a 9.5/10. Externally, it is better than the SR7 (which I have used before). Internally, the SR7 probably takes the cake, but the N4 is more than adequate in that sense.

Cons:
1. No sling mounts
2. No rear sight
3. Ugly chrome gas tube (can be easily removed though)
4. VFC internals inferior to KWA
5. No sling mounts
6. Mag it comes with BARELY fits into the magwell. It's tighter than... well, it's tight. Who uses included mags anyway?
7. Finish scratches easily (scratches add character though, embrace the battle hardened look!)
8. No sling mounts.
9. Some stock wobble (now I'm getting picky)
10. Refer to con #1

verified buyer
N. BOUFFARD | 2014-03-04
Product Information:
The externals of this gun are killer. literally the only problem with the externals of this gun is the front sight is off to the left by a few MMs. and the stupid pins won't budge. it's a surprisingly light gun and overall just feels extremely solid. the internals of this gun are solid, haven't had any trouble with around 5000 or so rounds. the range is decent, it really starts spreading at around 130 however that can easily be fixed with some hop up work and a new barrel. the rof is solid. the noveske KX3 that comes with it is freaking awesome and works very very well, it creates a pop noise that you can hear up to about 60 or so feet. (btw taking off the orange tip sucked and required breaking it off) overall it's an amazing gun and I highly recommend it if you're willing to swap out the barrel.

solid externals, what you would expect from a vfc.

the KX3 that comes with it is a huge bonus, that thing is awesome.

Cons:
Front sight is misaligned and the pins won't come out

taking off the ugly flashider sucked and required breaking it

doesn't come with a rear sight.

B. STROUSE | 2014-06-05
Product Information:
This gun is solid and shoots well straight out of the box, but I would recommend getting better mags like the 10 pack of Elite Force mags. The mag that the gun comes with needs the be played with for a while for it to seat properly in the magwell (ie. the paint needs to be worn through use). The flash hider is a pain to remove, but requires only a pair of vise grips and a strong grip to remove (it will get destroyed). I use a 7.4 LiPo with no issues.

Cons:
Stock mag does not seat properly until worn in
Shoots a little hot if you are looking for a CQB gun, but great for feild

Talk about the SOCOM Gear Full Metal M4 Noveske 7.25" RIS AEG Airsoft Gun with your friends on the facebook comments box below: