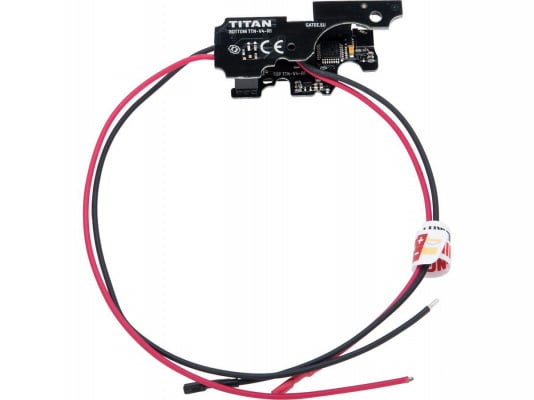 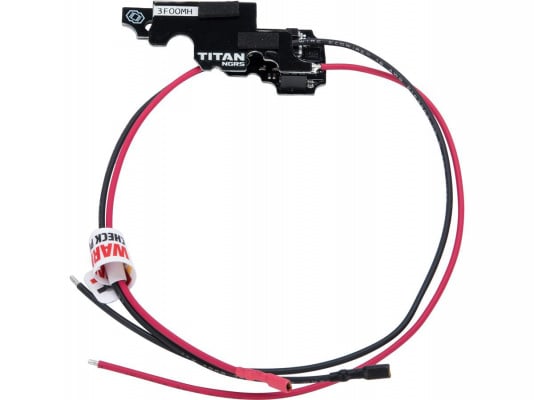 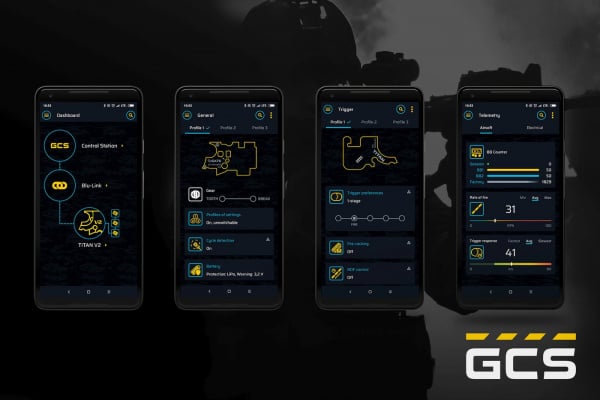 The Gate TITAN NGRS Front Wired Advanced MOSFET is an electronic unit that replaces the trigger contacts and cut off lever to that controls the NGRS AEG.

TRIGGER SENSITIVITY ADJUSTMENT
Five trigger sensors allow you to control trigger sensitivity. You do not have to disassemble your AEG. Just use the Tactical Programming Card or the GATE Control Station App to adjust the trigger to your preferences and level of skills. CONFIGURABLE FIRE SELECTOR (gen.2)
Two selector sensors allow you to use up to six fire selector modes, including innovative SEMI-BURST-AUTO mode: CYCLE DETECTION
Thanks to the gear sensor, TITAN precisely detects in which position the cycle should finish. Therefore, even the shortest trigger action produces at least one full cycle. Thanks to the cycle detection function you get:
PRE-COCKING (gen.2*)
Victory in the game is often a matter of fractions of seconds. Thanks to PRE-COCKING, you gain a trigger reaction similar to a real gun. It allows for initial spring compression, which speeds up the trigger response significantly.
There are two PRE-COCKING MODES: And three PRE-COCKING BOOST options: HIGH / MID / LOW.
*Now the pre-cocking is fully operational in SEMI, BURST and AUTO modes and there is no need to set the pre-cocking boost manually.
Please note: using PRE-COCKING increases wear and tear on the gearbox. BURST (gen.2*)
The burst enables you to shoot a pre-determined number of BBs, which is very useful in MILSLIM and when using low-caps.
* There is no need to set burst time. You can easily set burst between two and 10 shots. ROF CONTROL
This enables a reduction in a gun's rate of fire. You use stronger LiPo batteries, and still have a ROF just like in a real gun. ROF STAB
It allows you to change the way the ROF Control works:
SNIPER DELAY
It lets you to set delay between each SEMI shots to simulate the delay from reload or recoil. You can set 0.5s, 1s, 2s or 3s delay. SMART TRIGGER
Gate knows how vital the fast trigger response is during combat. This is why they have developed the Smart Trigger function. It enables you to achieve a faster trigger response. It works with the ROF Control System. During the first shot, the microprocessor sets the ROF Control to 100%. After the first shot, it switches to a previously programmed value (e.g. 50%). As a consequence, the first shot is fired at a full ROF, and subsequent shots at a reduced ROF. The best results can be achieved by using a battery with a higher than standard voltage. For example, if you use a 7.4V battery, you can replace it with 11.1V. In this way, you will achieve a faster trigger response with the same rate of fire as with a standard battery. *Works only when ROF STAB is ON. AUG MODE
Enjoy two stage trigger. Activate AUG Mode and set two different trigger sensitivities. Pulling the trigger slightly produces SEMI or BURST fire and pulling the trigger further produces BURST or AUTO fire (depending on the fire selector mode). BATTERY PROTECTION (gen.2*)
Protection against Over-Discharge of the Battery. Modern LiPo and LiFe batteries are very sensitive to over-discharge. If you do not want to damage the battery and you care about its service life, this protection is indispensable. The microprocessor monitors the battery voltage constantly. When the voltage drops down to a critical level, it will not allow firing. *TITAN detects the number of cells automatically. There is no need to reprogram TITAN every time you replace the battery. LOW BATTERY WARNING
When the battery voltage drops to a predefined level, the motor will vibrate at regular intervals. SMART FUSE
Gate have developed an electronic fuse with an accurate current sensor. A combination of current, voltage and temperature measurements makes your AEG installation highly reliable. It protects the MOSFET against overheating, overloading and short-circuiting. If your airsoft gun becomes jammed, the function protects the motor and battery against damage. ADAPTIVE ACTIVE BRAKE
It automatically adjusts the motor's braking power according to your needs. This prolongs the lifespan of the motor. MOSFET
Do you want to achieve a higher ROF and faster trigger response? Are you planning a power upgrade of your gun? In that case, you need a MOSFET. It targets the energy from the battery directly to the motor, bypassing the mechanical trigger contacts. As a result, you gain a higher ROF of the gun and a faster trigger response. BUILT-IN SELF-TEST
This allows you to quickly check whether the drop-in module is working properly. It helps to locate where the problem lies when anything goes wrong. COATING
Thanks to its special conformal coating, the product is resistant to atmospheric conditions (Military Specification MIL-V-173C). DEANS-T READY
The product has factory-fitted low-resistance deans-t connectors. MINI-TAMIYA ADAPTER
Thanks to the Mini Tamiya Adapters included in the kit, you can smoothly connect the drop-in module to your original (stock) installation. 14.8V LI-PO READY
The drop-in module can be used with batteries up to and including 14.8V LI-PO. The minimum operating voltage is 3V and maximum is 17V. PRINTED QUICKSTART
Make your adventure start more easily with a new product. The quickstart contains basic information and hints.

Talk about the Gate Titan Basic Front Wired NGRS Mosfet for Tokyo Marui Version 2 Next Generation Recoil Shock Gearboxes with your friends on the facebook comments box below: