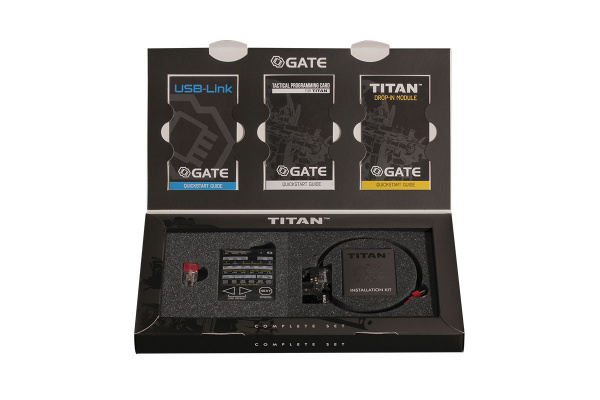 Write Review ❤ Add to Wishlist
Excluded from Coupon Codes
OUT OF STOCK
(notify me!)
Free Shipping for orders over $89 No Coupon needed

The Gate TITAN MOSFET is one of the most advanced electronic trigger units on the market for a V2 style gearbox. The TITAN has the capabilities of turning a regular gearbox into a devastating powerhouse, wreaking havoc over even high end traditional custom AEGs. Internally, instead of traditional trigger contacts or microswitches, it uses several optical sensors to detect movement of the trigger, meaning there is no wear or tear on the unit, as it's all done though the sensors! The trigger can be fine tuned using the included programming card or usb link, giving you several options such as setting your gun to have a two stage trigger (AUG style), a true hair trigger, and even turning your gun into a DMR styled rifle with a sniper delay, disallowing the user from firing several times in succession and giving it a true delay between shots.

The included programming card allows the user to set up their AEGs on the field without the use of a computer, allowing for quick changes and functionality swaps on the field when needed. The card plugs directly into the AEG, and then a battery plugs into the other end.

The GATE TITAN Complete set comes with the trigger board mosfet, a tactical programming card, a usb link, several spare pieces of smaller miscellaneous items (heatshrink, deans connector, motor plugs), a deans to tamiya adapter, as well as set up parts and user guides all packaged up in exquisite black and gold packaging.

No reviews | Write a Review
People who bought this item also purchased:

Talk about the Gate TITAN Advanced Rear Wired MOSFET Complete Set with your friends on the facebook comments box below: