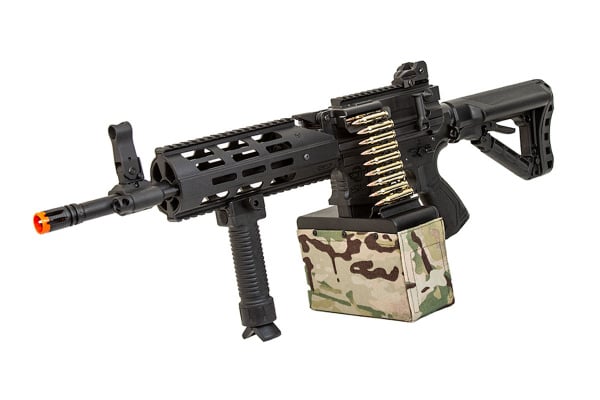 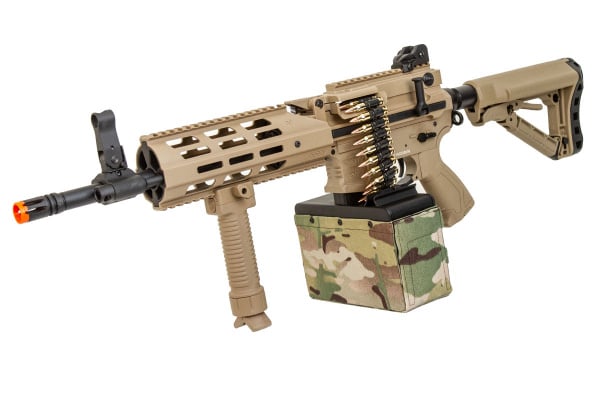 Is your team on the verge of defeat with the lack of firepower? Have no fear, G&G has got you covered with their light weight CM16 AEG LMG! In comparison to metal builds, this robust polymer build weighs in at around 7 lbs. This is perfect for anyone who wants to run a LMG without the extra weight and bulkiness from other models in the market. Don't be fooled by the polymer build, the structure feels and looks superb while maintaining its durable quality.

The upper receiver resembles an LMG style design, while the lower receiver is built as an M4 receiver. The top of the receiver can be opened to put the included dummy round belt in place. There is also a picatinny rail section for an optic with a removable rear sight. The front sight can fold down the moment you decide to use a dot sight or scope instead.

Since this model uses a M4 lower receiver, it can be used with most AEG M4 magazines. However, most players may just want to use the electric auto-winding box mag that comes in this package. This box magazine utilizes two CR123A batteries to feed BBs automatically into the airsoft gun. The box mag has a slot to attach the other end of the dummy round belt.

The M-LOK style handguard can accept most M-LOK rail sections and accessories for optimal customization. The top and bottom of the handguard utilizes picatinny rails for other accessories. In fact, G&G has include a vertical grip with a bipod inside its system. Simply deploy the bipod by pressing on the button on the top portion of the vertical grip and you are ready to set up your position. If you decide you need to be on the move, then you can use the rear sling adapter to help carry this to your next post.

The ergonomic six-position GOS-V3 stock holds the battery compartment for the LMG. This stock uses G&G's new design rubber pad for extra comfort while shouldering the airsoft gun. Additionally, the stock has a smaller compartment that can hold an extra two CR123A batteries for the box magazine.

The CM16 has a MOSFET chip that is able to stop batteries such as a LiPo from over-discharging and becoming damaged. The MOSFET is programmable to shoot from full auto to three-round bursts based on your tactical needs. G&G has paired the MOSFET with an electronic trigger unit that increases response and assists in preventing trigger burns or locks in rapid semi-auto firing. There is also a 6.03mm tight bore inner barrel installed in the LMG to excel in BB range and accuracy with every shot you fire.

Overall, the G&G CM16 LMG AEG Airsoft Light Machine Gun is an amazing choice for any player looking to step up their game and conquer the field with superior firepower.

Pros:
has a m4 lower
has a 6.03 barrel already in it
has M-Lok handguard

Cons:
I had to buy more batteries and BB's so I could play more

Talk about the G&G CM16 LMG AEG Airsoft Light Machine Gun (Option) with your friends on the facebook comments box below: