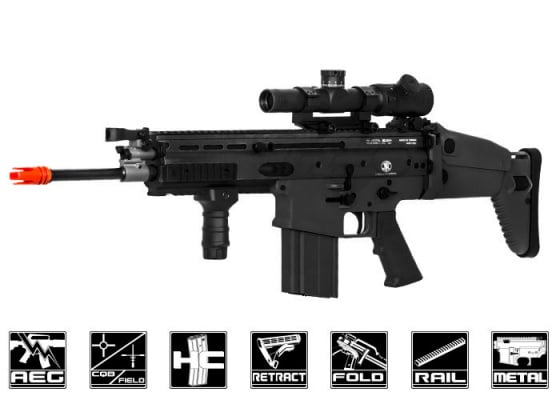 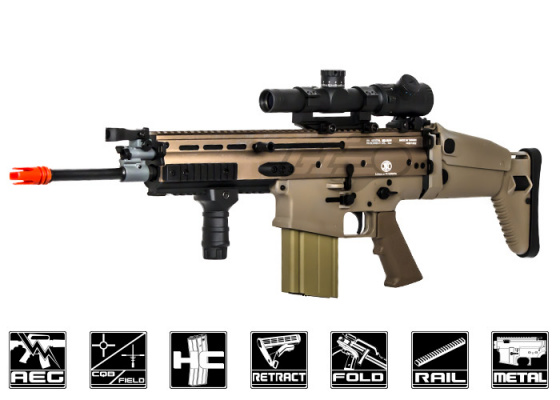 ( 2 Reviews )
Excluded from Coupon Codes
OUT OF STOCK
(notify me!)
Free Shipping for orders over $89 No Coupon needed

VFC has taken their popular MK17-H, which has been referred to as the best replica of the MK17 currently on the market, and made it even better. The VFC Full Metal FN Herstal SCAR-H MK17 STD Airsoft Gun is now fully licensed by FN Herstal of Belgium, and is arguably the most realistic SCAR-H replica on the airsoft market. The VFC SCAR-H maintains many of the same features and controls as the M4/M16 series, so the transition for users is simple. In addition, the MK17-H has many improvements over the M4 and the M16. The lower receiver is constructed from sturdy polymers to reduce weight. The magazine release and selector switch are ambidextrous, and the bolt release is functional. Not only is the stock retractable it is side folding and has an adjustable cheek rest, and unlike the many other brands, the wires are not exposed when the stock is folded. As if all of that wasn't enough, An integrated and uninterrupted rail runs along the top of the receiver giving the user plenty of room to mount optics and night vision equipment. In addition, there is a rail on the underside of the handguard and two removable rails for each side of the handguard that enable the user to mount accessories like a flashlight or vertical grip. VFC has really outdone themselves on this one. The MK17 STD is an amazing platform that is perfect for either a battle rifle or DMR build, the 7.62 style magazine has an aggressive look on the field combined with its sheer beauty the MK17 is a stand out gun.

C. PETTINGILL | 2017-02-05
Product Information:
If your looking for a Scar-H this is the one! I have owned several other scars looking for the perfect one and each one has been a disappointment. Until i found this one! From the Feel it has in your hands to the precision and power it offers on the battlefield, this weapon is as versatile as it is beautiful. I get compliments every game i go to.

I use a grip-pod with a 4x20 magnification scope which makes for a great marksman set up. So far i have had no problems, after going through more than 3000 rounds of ammunition. I would highly recommend getting some silicon oil, it tends to bind up when not properly lubricated. the folding stock is perfect for tight spaces and when piloting any kind of vehicle. (I operate a tank destroyer which is very cramped) the rails are solid and great for mounting any accessory.

The motor whines a bit when firing, but it doesn't sound bad (i kind of like it). The fire rate is very quick, yet very controllable. Rage and accuracy are superb with tight groupings even at long range. Perfect for CQB and Field games.

Cons:
battery location is a tight fit
semi auto isn't very functional due to the ambidextrous controls
I personally don't like the Scar's iron sights, but at least they are well made.

T. OUTLAW | 2017-01-28
Product Information:
This gun is really awesome
I've used it for aa few games and its extremely accurate, it also has a really long range and high fps. due to its accuracy i mainly use it on semi and it works really well. its also extremely light which is really nice. i would recommend this to any field to mid range player. this gun is easily much better than an m4 or ak. if your considering it i strongly recommend buying it

Talk about the FN Herstal SCAR-H MK17 STD Carbine AEG Airsoft Rifle by VFC (Option) with your friends on the facebook comments box below: