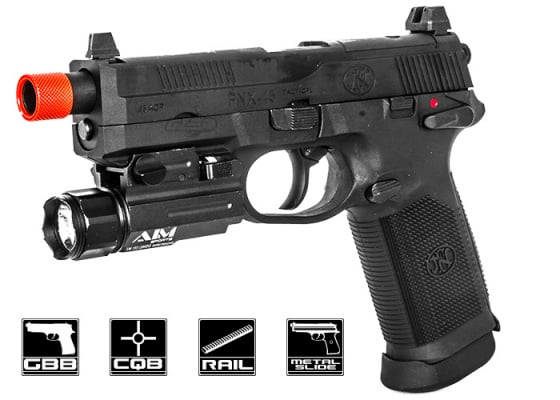 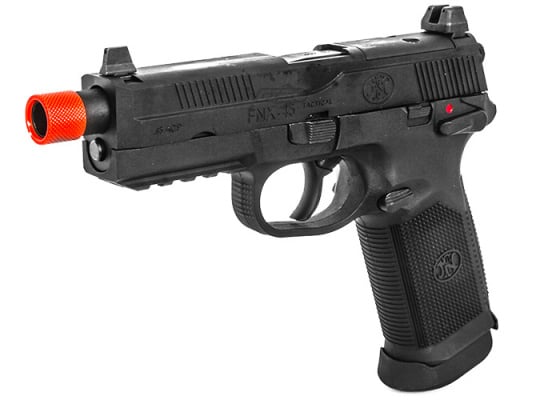 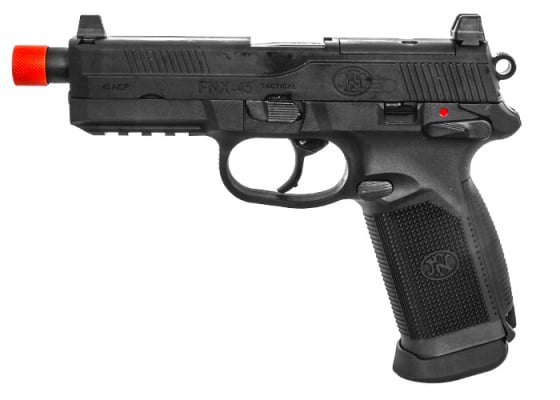 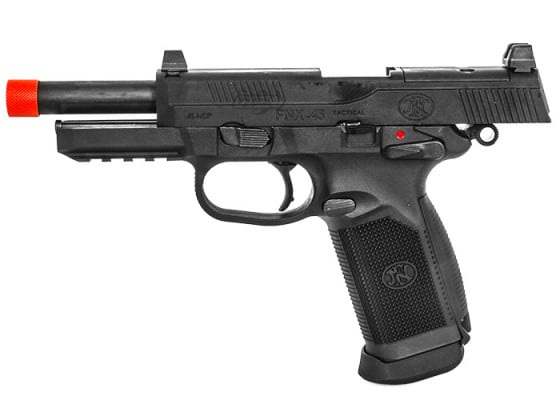 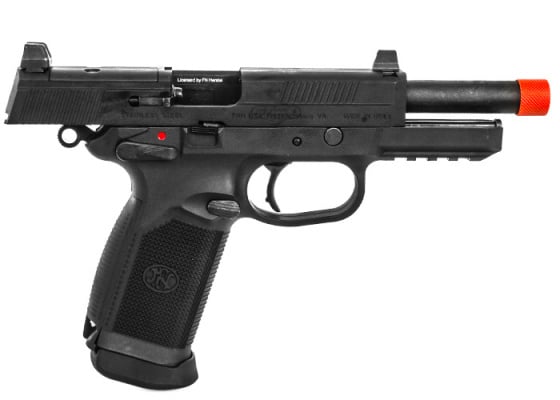 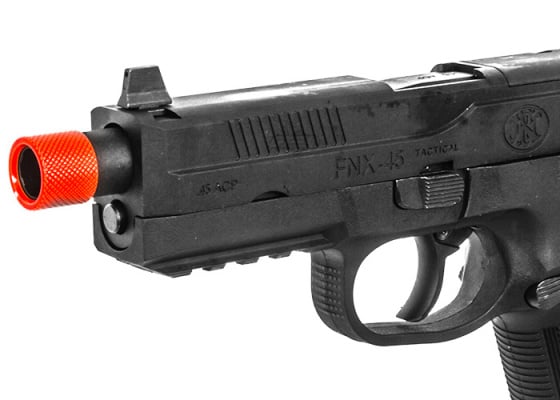 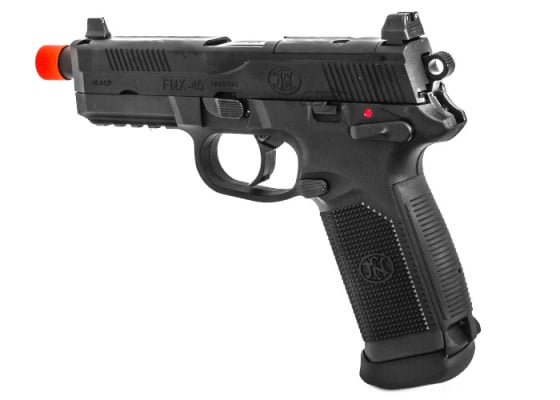 The FN Herstal FNX-45 Tactical is a gas blowback pistol officially licensed by FN Herstal of Belgium. Established in 1889 to manufacture 150,000 Mauser Model 89 Rifles, FN Products have become standard issue for many law enforcement agencies and military's around the world. Their products range from the FNX line of pistols to the M2 .50 caliber machine gun.

Special features include full FN Herstal FNX-45 Tactical Trademarks on the slide and the frame. Specially designed rear cocking serration allowing the operator to cock the gun even in a slippery condition. The FNX-45 Tactical has an ambidextrous slide release, and an ambidextrous magazine release button, making this a right hand and left hand friendly gun. The FNX-45 points naturally, very similar to the 1911. Just like the real FNX series, the FNX-45 has a unique function that can speed up the reload time. When the slide is lock back, indicating the gun is empty, when the operator insert the new magazine into the gun with the right angle and proper amount of force, the slide will automatically go forward. Instead of adding another step to release the slide, the operator can now reacquire firm grip and continue to fire.

verified buyer
A. FOGNANO | 2016-06-16
Product Information:
I went out looking for an air soft sidearm that wasn't a 1911, and ended up getting this after a lot of looking. The gun itself is modeled after the FN-45 handgun and Cybergun does an excellent job of getting it as cosmetically close to the real steel as possible, right down to the internals.

This replica features a double action trigger equipt with a safety and decock feature which are ambidextrous. The safety, indicated by a red dot that the switch covers, does not get covered all the way, unfortunately. The decock also only collapses the hammer half way. The upper receiver of the replica holds trijicon-style sights which are elevated to allow the user to see over barrel attachments. The sights are okay, though the white dot filling on mine was faded. The upper receiver also has a plate that can be removed to allow the user to attach a red dot. The lower receiver is plastic and had a tactical rail in front of the trigger guard. The stippling on the hang grip is aggressive and makes it difficult for the replica to slip out of your hands. It should be noted that the upper receiver and barrel tend to wobble. It isn't terrible, but it does take away from the realism of the replica substantially.

The Mag release for this replica is ambidextrous, as well as the disassembly switch. Disassembly of this replica is very easy, and cleaning/lubing the parts is nearly hassle free. The Magazine is the bulk of the weight for the unit. The magazine fits tightly in the mag well, but has some quality issues. The first time I let the spring slip on the mag, the plastic feeding tip at the end of the spring snapped in half. The mag itself also has a plastic base plate which is only held on by one screw, and can snap off easily. This, in my opinion, is unacceptable quality for a Magazine which retails for $40.

Overall, this is a good replica and I would recommend it to anyone who wants something other than the standard 1911's that saturate the American market. Beware that there currently aren't a lot of retailers that sell specific spare parts, let alone internal upgrades for this replica yet.

It is currently $190 (though I got it on a shocker for 160) on ASGI, but I've found it else ware running as high as $225. The Mags are also very expensive, going for about $40 a pop. If this wasn't a shocker sale when I got it, I probably would have shopped else ware and for a different replica.

Pros:
- Not a Beretta M9
- Not a 1911
- Sturdy and has good weight
- Good recoil for a GBB
- Licensed by FN and Cybergun
- Can accept silencers
- Sights accomidate silencers
- Easy take down
- Double action
- Decock feature
- Safety feature
- Tactical rail and top sight mount
- Stippling on grip is nice

Cons:
- High Price of replica
- High Price of extra Mags
- afety indicator is not completely covered when engaged
- Decock only 1/2 way
- Plastic spring end on mag breaks easily.
- Plastic base plate of the mag is only held by 1 screw and can snap off easily.
- Thread protector prevents barrel from being removed
- Barrel and upper receiver wobble a lot
- Trijicon-style sights on mine were poor
- Paint wares easily
- Few places sell spare parts

verified buyer
J. CHOY | 2017-07-10
Product Information:
One of the best built GBB pistols I've ever used (and I have experience with WE Tech, KWA, KJW, more) although the barrel is still noticeably wobbly to the point where you don't want a heavy silencer on it. Beware of the orange thread protector, it is glued on. Needs to be heated with a heat gun to be removed.

Pros:
- Authentic trademarks.
- Very realistic finish, one of the most realistic looking airsoft pistols I've ever seen.
- Seems to have the best build quality of any GBB pistol I've used. Very solid polymers and the slide is very thick leading to heavier recoil.
- Working decocker though it only decocks to half way.
- Threaded muzzle, though it is not the usual 14mm CCW.
- Picatinny rail, fully ambidextrous.
- Performs like most similarly priced GBB pistols.

Cons:
- Glued thread protector. Requires heat gun to remove.
- Not many holsters can fit it.
- Cheap iron sights, no white dots but a crappy fiber optic implementation that doesn't really work.
- The slide being so heavy also makes it consume more gas.
- Barrel not sturdy enough for a normal sized sound suppressor/barrel extension.

Talk about the FN Herstal FNX-45 Tactical GBB Airsoft Pistol (Black) with your friends on the facebook comments box below: