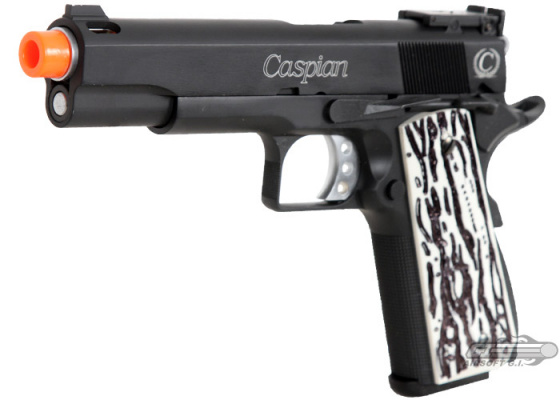 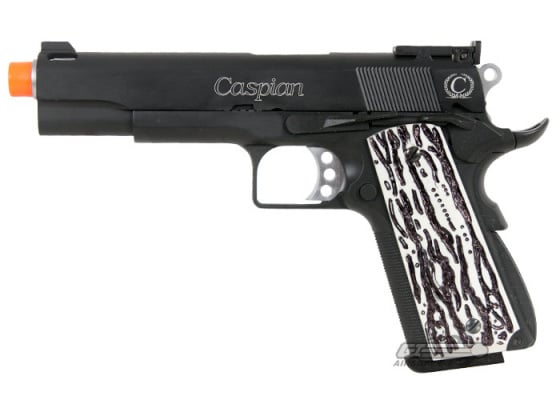 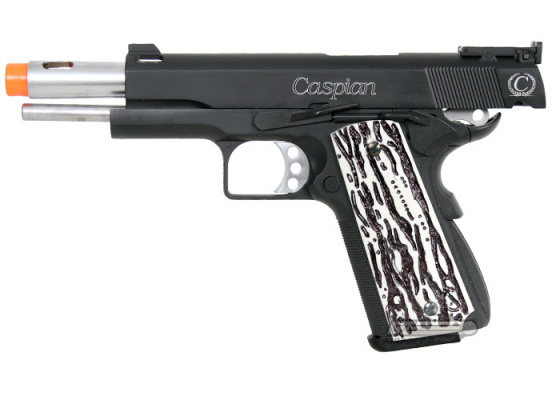 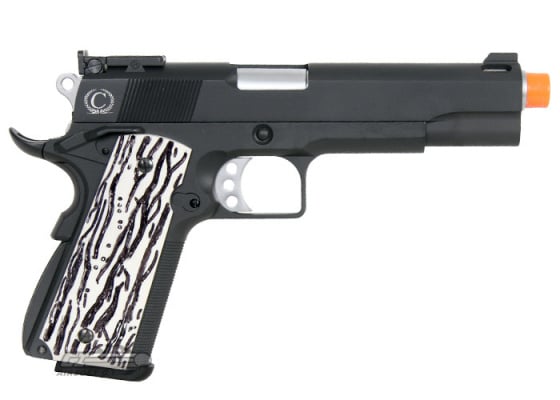 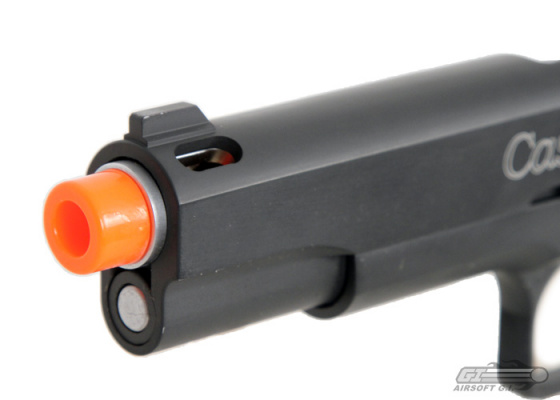 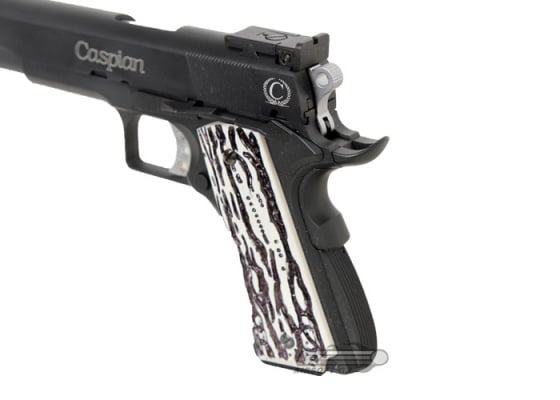 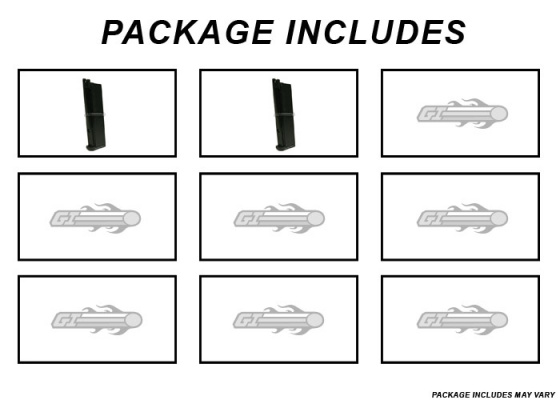 This Caspian 1911 Single Stack is unique among the other 1911's with its ivory grips. The slide (compatible with the TM 1911) and the frame is constructed from metal. The blow back action is operated by high pressure gas, such as green gas, red gas, or propane. The rear sight is adjustable for improved accuracy and personal preference. The functional grip safety and ambidextrous slide safety make its operation safe for all users. And, the extended slide release helps the user operate the 1911 quickly without transitioning their grip. The reinforced metal parts include the outer barrel, chamber, recoil spring rod, slide stop, ambidextrous safety, hammer, and trigger. Internal upgrade parts include reinforced recoil spring, hammer spring, firing pin, extreme high flow valve. This particular model of 1911 has a gas recoil compensator at the front of the barrel and slide for a little bit of flare and style. Keep in mind that the high flow of gas through this gun might hinder its optimum performance during rapid fire.

Employee Review:
Recently we have seen many reincarnation's of America's venerable 1911 pistol. WE is no stranger to the manufacturer of 1911 style gas blow back airsoft pistols, having great success with their stylish series of Hi-Capa pistols. Their pistols have offered both full metal construction and compatibility with the more powerful red and green gases. And it is no exaggeration to say that the WE 1911 single stack is their best pistol yet.

The full metal body gives it a feel and weight that you do not see in other stock brands like the Tokyo Marui or Western Arms 1911s. If it wasn't for the orange tip I could swear that I was holding the real article. Its operation is almost identical to that of the real single action M1911 designed so many years ago by John Browning. The design includes a realistic magazine release, slide stop, and hammer safety. Also, for added benefit the magazine incorporates a new loading system that allows for quick loading without the benefit of a speed loader. It will not only save you time but it will save your fingers.

The only limitation that I encountered was the inability to rapidly fire. I do not claim to be an expert on physics, however the problem would seem to relate to the cooling of the gases in the magazine. The magazine cools down too quickly, so the gases fail to expand and reducing the recoil of the slide till it is unable to move back. The problem isn't unprecedented and has been seen in other gas blow back designs in the past. However, WE had the forethought to include a second magazine to help solve this problem.

Overall, I would say that the WE 1911 is an excellent firearm for its value. Like all Airsoft guns it has its own inherent flaws, but for those looking for a realistic handgun and are willing to take there time with well aimed shots I would recommend this gun.

D. WILSON | 2010-06-22
Product Information:
awsome gun i got it a year in a half ago it still works nothing new on it and i have use it almost every satarday day along with my kwa M4

D. WILSON | 2010-06-22
Product Information:
awsome gun i got it a year in a half ago it still works nothing new on it and i have use it almost every satarday day along with my kwa M4

Talk about the (Discontinued) Caspian Full Metal 1911 Single Stack GBB Airsoft Pistol with your friends on the facebook comments box below: