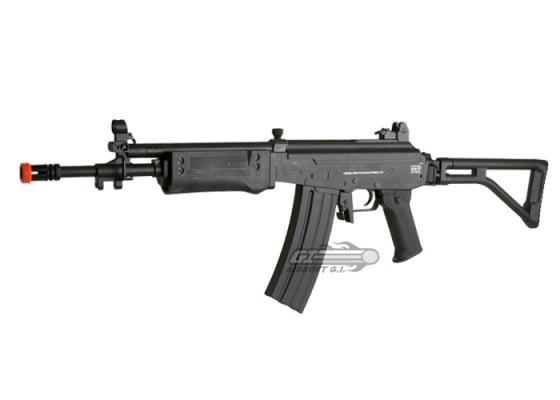 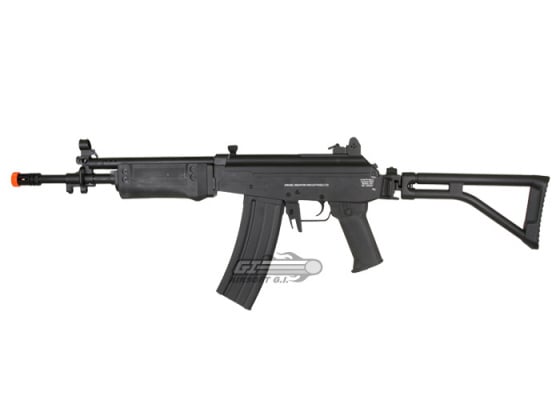 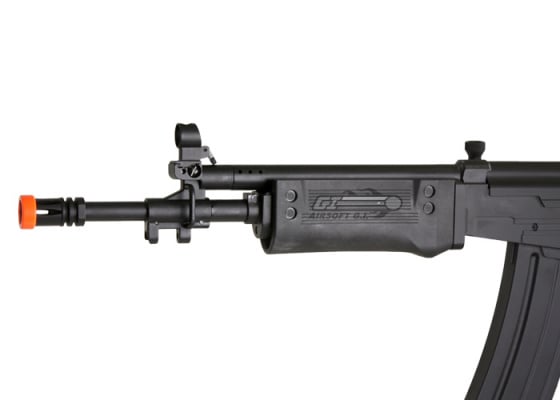 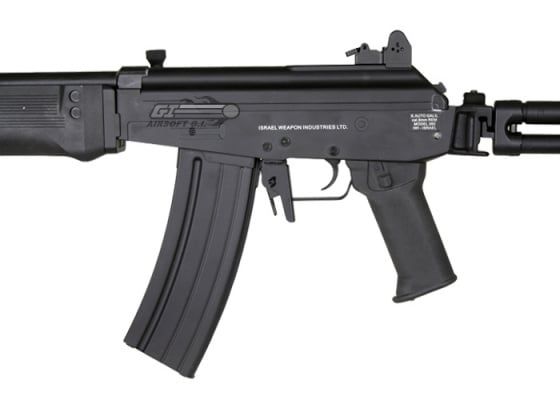 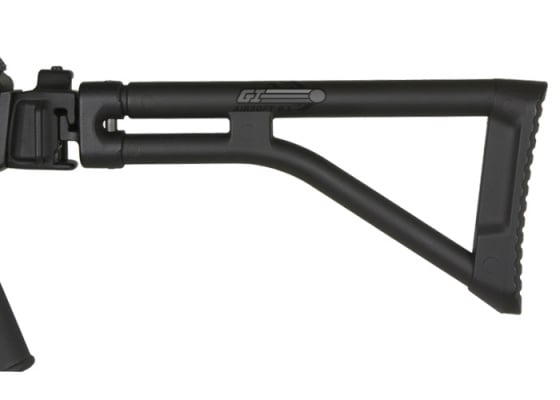 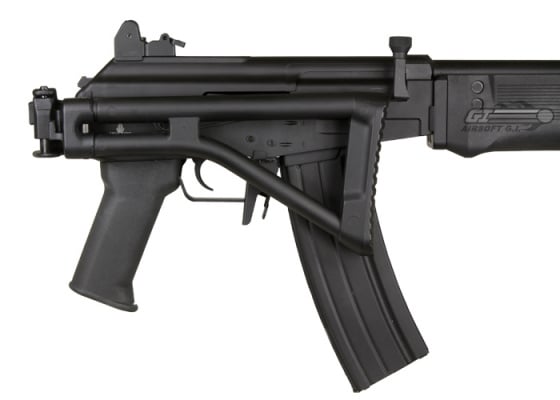 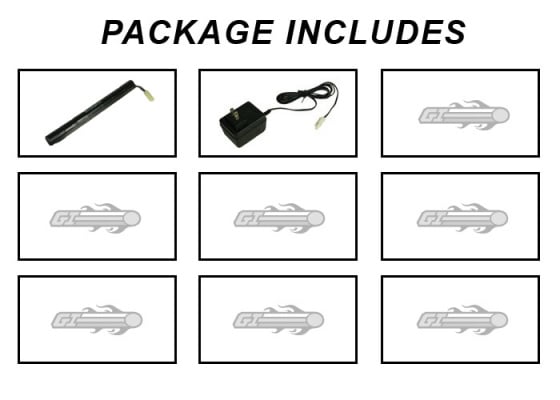 ( 11 Reviews )
Free Shipping for orders over $89 No Coupon needed

The Cyma Full Metal Galil SAR is a great AEG for indoor and outdoor play. The functioning bolt is smooth and with a very stiff spring behind it the sound is extremely realistic, it makes a very distinct slap. The full metal body is very solid, as is the metal folding stock. The selector and magazine release are stiff, but not too stiff, they function great. The two sling mounts on the left side of the gun are very solid, they don't swivel or swing which also means they don't make any noise. For realism, on the left side of the body 'Israel Weapon Industries Ltd.' is printed, and the IWI logo is printed on the right side. The Galil is a great example of Cyma's high end AEG line up.


Airsoft GI Battery Disclaimer:
Airsoft GI is not responsible for batteries that have been damaged as a result of improper operation, storage, misuse or abuse, accident or neglect, such as physical damage resulting from misuse; contact with liquid, water, rain, extreme humidity or heavy perspiration, sand, dirt or the like, extreme heat, or food; use of the battery for commercial purposes or subjecting the battery to abnormal usage conditions, or other acts which are not the fault of Airsoft GI. Make sure you understand how your battery should be used and how long it should be charged. If you have any doubt regarding the operation, charging, or storage of your battery and/or charger, ask. A charging battery should not be left unattended and should be picked up periodically while charging to check for overheating. Do not charge batteries near flammable material. For more information regarding batteries please refer to the Frequently Asked Questions or the Airsoft GI Airsoft 101 Guide.

D. BEVIS | 2010-08-04
Product Information:
So i bought this galil merely to be different from all other guns. DO NOT DO THAT VERY BAD IDEA. After two months of playing with it i ended up wanting rails to put a scope and such on. You cant get those. Not good build... bad customization options. Battery is a pain in the ass. Top peice broke off first day i got it. It is full metal but it just adds weight to your gun. And isnt good in my opinion i would not recommend this to anyone. My galil broke after 3 months of play. I was firing it. And all of a sudden stopped shooting. I figured battery was dead or it was a fuse pop. It wasn't it was this things crap motor. Shut down on me.


Cons:
Crap motor
Heavier..
Bad internals..
No rails
No customization
Not good fire rate.
Breaks easily
Not good build
Battery is a pain in the ass to get in and out
OVERALL TERRIBLE GUN. I suggest something from the Airsoft Gi G4 series

P. NICKELL | 2010-08-08
Product Information:
bought this gun about 4 or so konths ago and have been using it since, it is a great gun to me, really well constructed, nice quality metal, and unique, it isnt an m4 and isnt quite an ak, the gun fits me overall quite nicely and is much lighter compared to other guns, without being unrealistic, but am having a problem with getting the flash hider off with all the techniques i've seen before
as i said, overall a good gun

Cons:
flash hider is a real pain to get off
other than that, great gun

I. SABANSKY | 2010-10-04
Product Information:
The first impression of having in hands this airsoft Glilon (the Israeli army nickname for SAR version) is that it is for those keen of being as close to the reality as possible. The gun&#8217;s weight is about the same as of the real prototype, and not only that, it looks very real. That&#8217;s due to its whole metal body and colour.

What should be noted specially is the dioptrical site system which is identical to that of the real gun. And I&#8217;d say it&#8217;s probably the best site of all AEGs&#8217;. The front sight is adjustable up/down (in the package comes a tool for easy rotating it), left/right, the rear sight has two positions + two dots for night aiming (the front one is also equipped with night mark). That all allows for precise shooting adjustment of the gun. An experienced airsoft soldier will enjoy playing with the aiming devices of this gun.

And I tell you there is what to aim for! The gun is specified to shoot about 460 fps with 0.12 BBs, when using 0.2 g BBs I got the reading of 110 meters per second (360 fps). Although it could be more, or one could expect such a solid gun to be even stronger (again for fans of heavy combat and real-world-like skirmishing) .

This AEG Glilon comes with a chargeable (wheeled spring) round metal (!) magazine, some players prefer to carry amount of rounds equal to that of a real soldier in field (up to 200) but even for those not limiting themselves with ammunition per battle the 430 round magazine will be an adequate asset. When firing single shots the spring charge of the magazine allows quite a few BBs without recharging, while automatic shooting due to adequately high rate quickly depletes the current charge&#8230;

The real Galil (design of which is based on AK-47) as an advantage over its elder brother and all AKs has a fire selector switch duplicated right above the &#8216;pistol&#8217; grip, which is very convenient and is a remarkable ergonomic improvement. May be one day a manufacturer of airsoft Galil will make an operational second selector, for now all known airsoft Galils have only fake ones.

Galils have no wooden parts, though for someone it may be a disadvantage? The hand grip is made of dark plastic same color as the metal parts.

In general it is a heavy, accurate and serious gun. The rifle feels very masculine (sorry ladies may be you stick to lighter MA4s with adjustable stock?). Its look is nice, easily recognizable among many others, and stylish (perhaps Israeli weapon engineers pay particular attention to appearance of their inventions?).

Not the best side of this gun (although it may pertain to all metal and not fully metal AEGs) is that their metal is not quite metal really&#8230; most of AEGs are manufactured using &#8220;powder&#8221; steel which results in parts being quite fragile. Unfortunately this Galil is not an exception. And the fact that the stock of it which got torn away at the very first run with the gun in hands (the holding thread in the back end of the body failed to hold the screw) shows how vulnerable &#8220;powder&#8221; metal is. One only has to hope that the mechanism and the gears are of better quality metal.

Although the first drop against the ground Galil passed perfectly, which is not accessible to some AEGs&#8230;

Pros:
- Weight is about the same as the real world galil, very realistic view and feel
- metal gearbox - easy upgrade to M120 or even 130
- good sight including night sight
- full metal body
- 430 rounds magazine
- good hop up rather precise shooting

Talk about the CYMA Full Metal Galil SAR AEG Airsoft Rifle (Licensed Product) with your friends on the facebook comments box below: