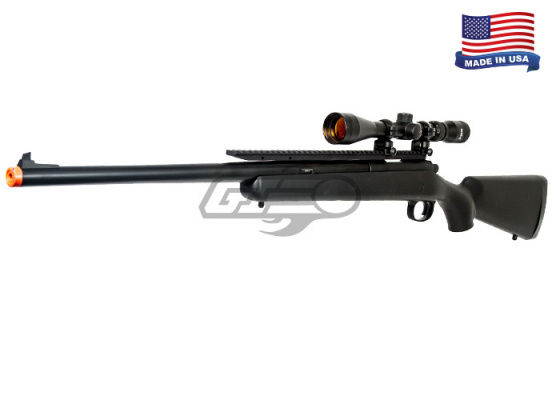 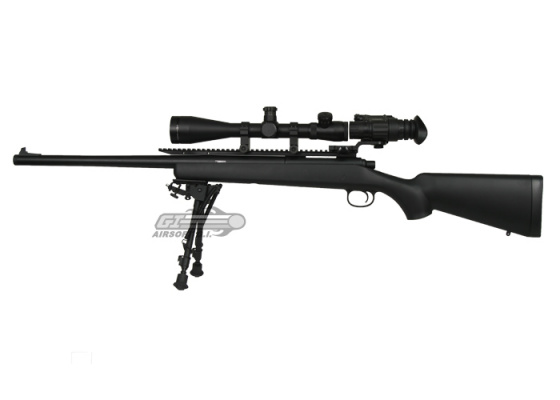 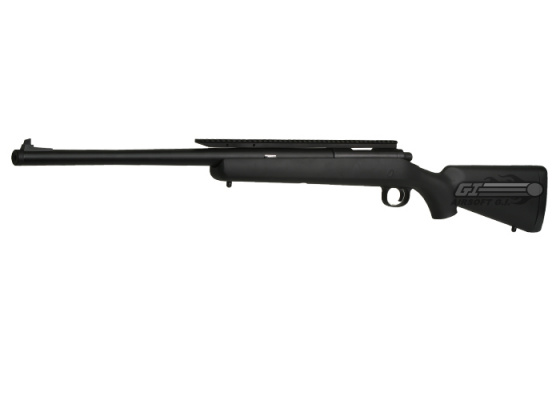 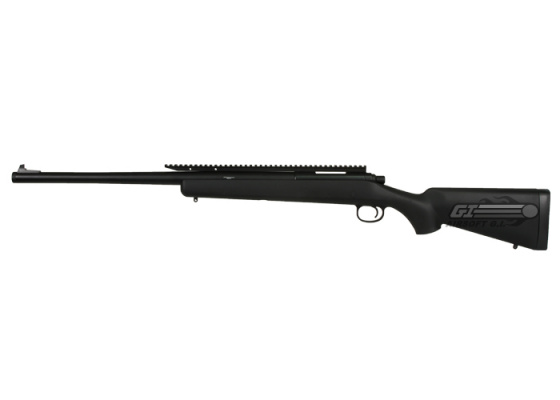 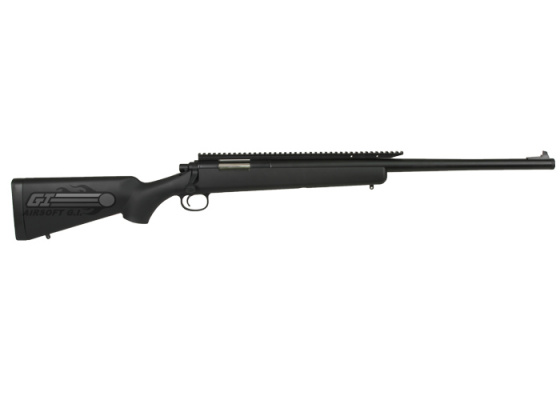 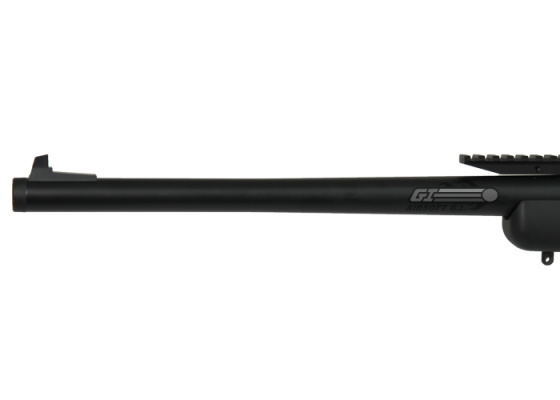 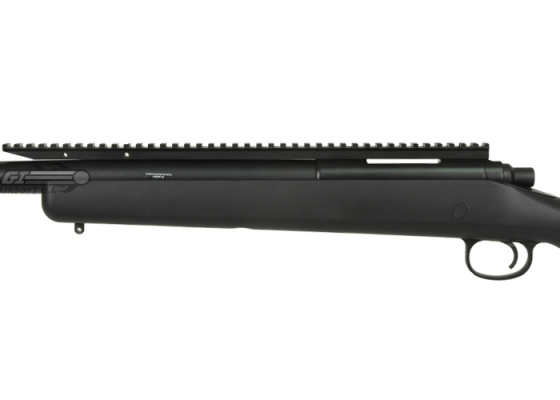 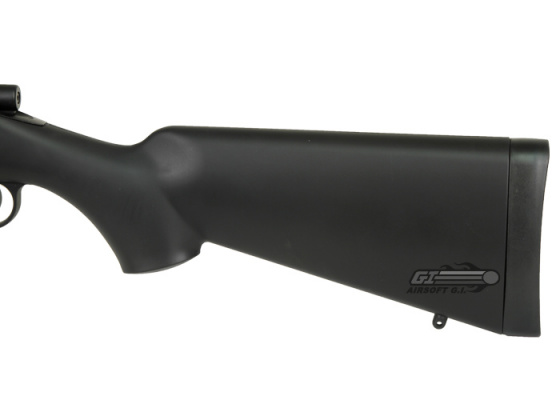 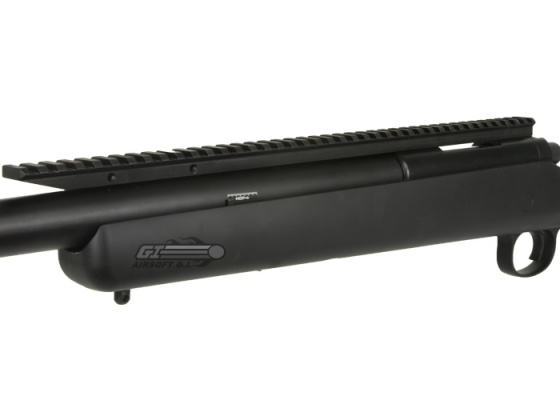 ( 40 Reviews ) ❤ Add to Wishlist
OUT OF STOCK
(notify me!)
Airsoft GI is at it again! We can't help but provide some of the best bang for buck airsoft guns in the world, we started with our custom armory, then moved to our G4s, and now we are doing it again with the Airsoft GI G700 Sniper Rifle. We've combined the amazing value of the VSR-11 with the performance and reliability of the Airsoft GI PE upgrade parts to make the perfect out of the box high performance rifle that won't break the bank. In addition to upgrading the gun we've fitted it with a custom made scope rail!

The stock VSR-11 does not come with a rail for a scope, so we made our own. The designers at Airsoft GI took their time to create a MIL-STD-1913 rail that would mount perfectly to the gun to provide a stable foundation for optics. We designed and produced this rail right here in the United States! This gives us complete control over the quality, and we produce nothing but the best. Many lesser quality rail systems produced over seas are not made to military specifications, which means that some QD lever mounts can't fit; however the rail on the G700 was made to match perfectly with MILSPEC equipment. This rail is special, not only because it's engineered specifically for this gun, but also because it's much longer than most sniper rifle top rails. The added length adds an aggressive and unique look to the gun and also gives the shooter the ability to mount night vision optics behind their scope for night games! Many real steel manufacturers of guns are adding long rails to their guns for this exact purpose, it gives the shooter limitless operation, day or night.

No other company can offer you a, literally hand crafted, sniper rifle that shoots 570 FPS (Max reading with Competition Electronics Pro Chrono and 0.2g bbs) out of the box at such an amazing price. Reach out and touch someone with the Airsoft GI G700 without shooting a hole in your wallet.

That's $201.00 in upgrades! Why do it yourself when Airsoft GI can build it for you and save you money in the process!

Please Note:
Scopes and bipod are not included. 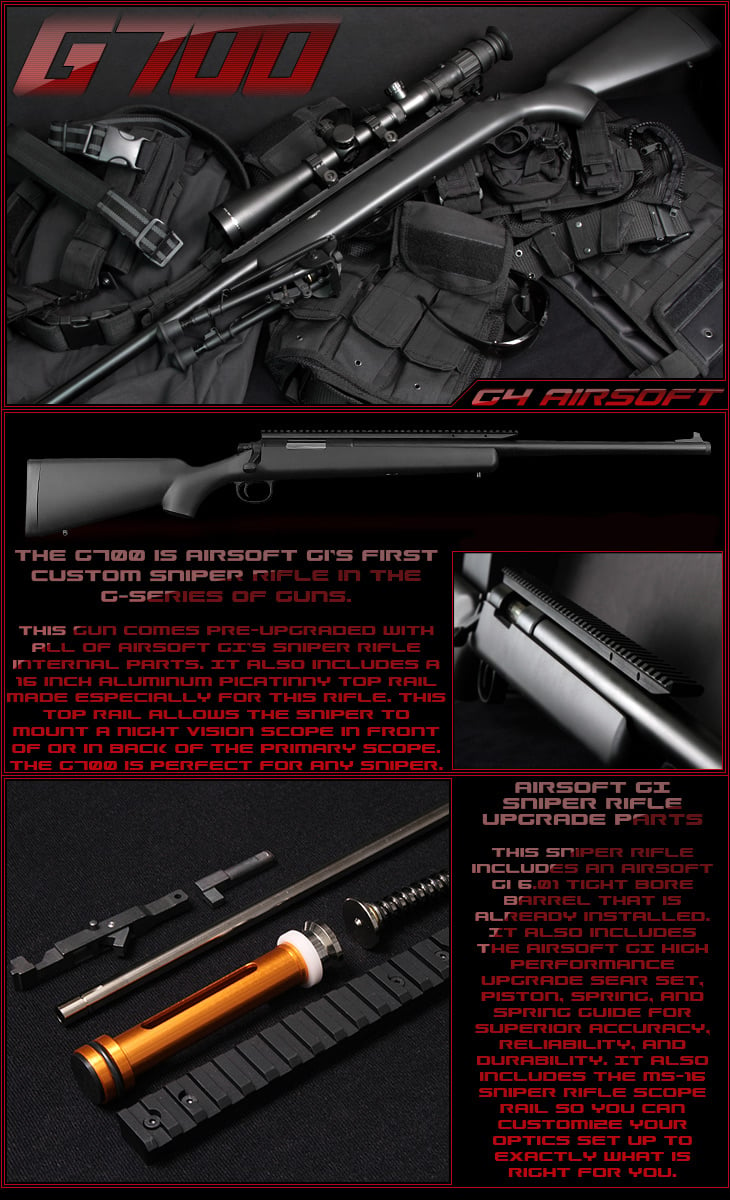 verified buyer
T. KALISTER | 2014-02-06
Product Information:
I am quite disappointed with this sniper. Not only did I have to wait weeks to even know it was in stock but literally the first day I got it and the piston ring broke. Not going to lie the bolt was hard to pull back. And I'm an actual Army sniper but we don't have springs. But anyways when it's not broken and actually works it isn't that bad. It's not dead on accurate(i used Magpull .40g BB) like real snipers are but its passable. My least favorite part about the actual gun was the actual spring. It's pretty much useless when you are laying down because when chambering a new BB while laying down requires a lot of effort. I'm not saying I'm a body builder but I have some muscle and it really is hard to pull back without good amount of leverage. For me that bad because who I snipe.
Going back to the broken piston ring, like i said it broke about 2 mags into trying it out. Took about a week or so to get it back. Not complaining about that. But I don't use it as much anymore because I moved from my big open area i practice with it. But not less than a month ago i actually took it out to show a couple buddies of mine and shot it off a bit in my backyard. They had trouble pulling the bolt back too (they are amateurs) and I've put about 50 clips in it if not more. I did feel a difference when I first bought it then after 20 clips went through it but not a significant amount. But I did try to show them a couple proper prone positions that we used in the Army and I pulled the bolt back (still not easy) and it broke again! So mad! I haven't gone through AirsoftGi yet (not sure if I will,unless the warranty is still on but doubt it) because I really don't want that same piston ring or any other of those upgradable parts. I can already tell they are worthless in the long run.
The long rail did look cool but was it rubs on the scope and I don't like the high scope rings.
I did try to remove the orange tip without researching and figured out its not just on the outside of the barrel it goes further in the outer barrel so it would look bad with it off. So if a quarter broken off.
In conclusion, if the piston ring didn't break twice I may have actually liked the sniper. It just needs better upgraded parts.

C. DOOLEY | 2014-04-15
Product Information:
I bought this as a Birthday present to myself almost two years ago.

I will start off by saying that you could build your own but better for the same price.
However, if you are unable to, or don't know someone, this isn't a bad BASR.

The bolt pull is pretty stiff, but it is a pretty accurate BASR as it is, especially considering that it didn't even have an upgraded bucking.

I traded it off to a friend about a year ago, and it is still working fine for him.


Cons:
Starts off with a heavy bolt pull
Could build a better one for the same price

verified buyer
B. BOYLE | 2015-08-05
Product Information:
I've had this gun for almost five years, I got it pretty close to when it came out. This isn't a bad beginner rifle, but it could use some work. The gun is a VSR 10 clone, so it takes most VSR parts. GI's sears wear down after a while so they will need to be replaced down the road if you get this. The hop up that comes with the gun cant lift .40's up, and that's bad because .40's are the ideal weight for the spring in this gun. The Action Army VSR 10 hop up is very good and it should go into this gun just fine, but it needs a little tweaking. PDI's hop up will work too and apparently that fits right in, but PDI's hop up often has the right curve that VSR's have. The piston and cylinder parts are okayish, they will suffice for the gun, although it does help to grease everything up inside. I also replaced the barrel from GI's to the PDI one. To be honest, I think GI took the wrong approach to upgrading this rifle. The thing you need to upgrade first in a sniper is the barrel and the hop up, GI only did the barrel. A sniper with a high quality RA Tech or PDI barrel along with an Action Army hop up unit will shoot more accurately. Also, the barrel spacers that come with VSR's are very bad and don't do their job, so you will need to put in your own. I used electrical and masking tape to make my own barrel spacers, this is important to reduce vibration in the inner barrel as it can alter the trajectory of the BB.

Pros:
Great for begginers
Good rail for scopes and night vision (If you can afford it)
Decently accurate with .3's for beginners

Cons:
Bolt needs some strength to pull back, but it becomes easier with the right technique.
No upgraded hop up
Mediocre sears
90% TM VSR clone, some small differences that could give you a headache while installing better parts
When I got it, one of the screws by the mag well was stripped, so I had to work magic to get it out

Mil-Spec Monkey If I Tell You Patch (Dark Ops)

Talk about the Airsoft GI G700 Upgraded Sniper Airsoft Rifle with your friends on the facebook comments box below: