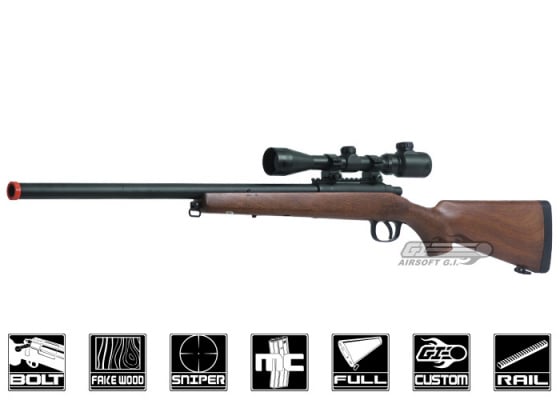 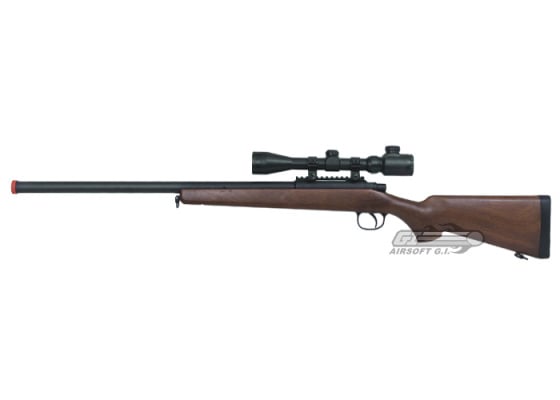 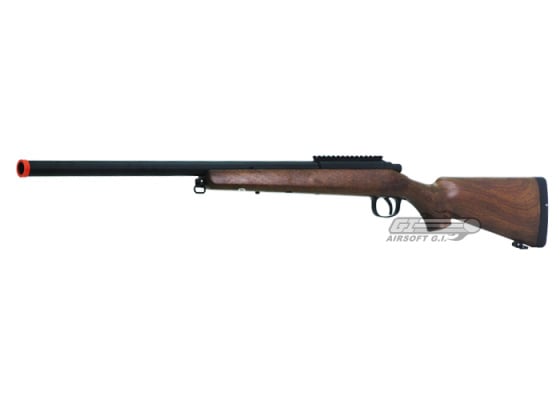 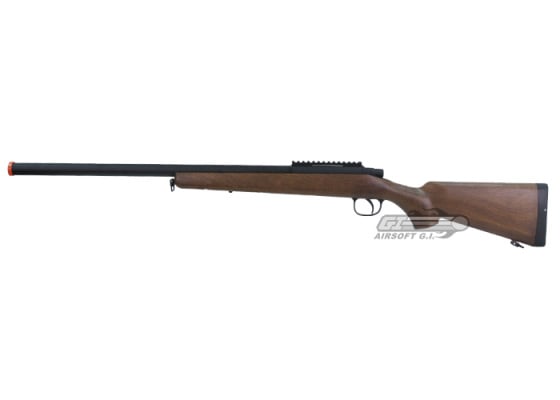 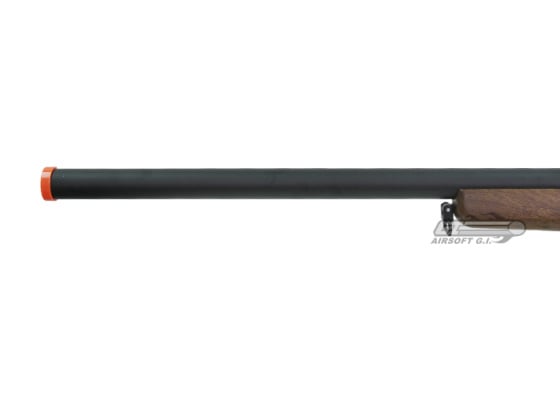 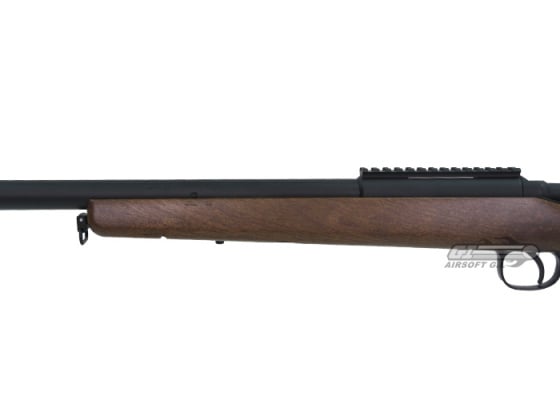 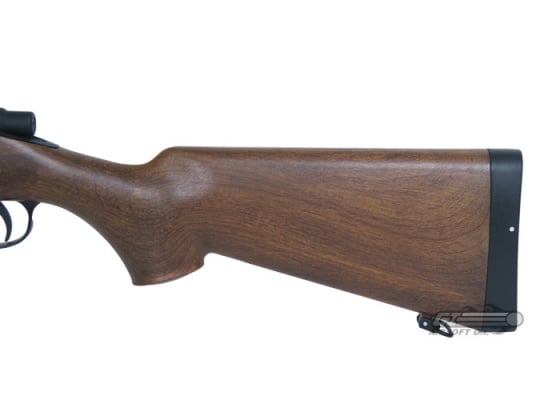 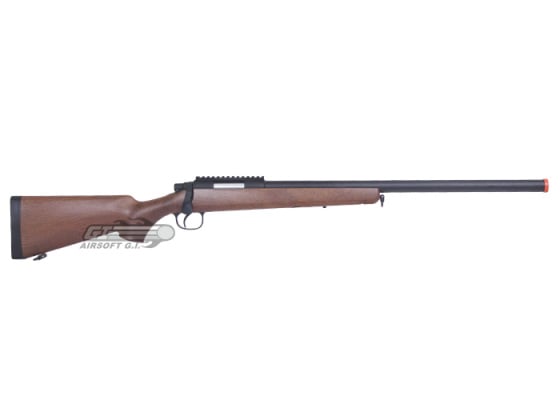 Description:
The AGM MP-001 is an excellent lightweight long range bolt action sniper rifle. The plastic stock make the gun extremely light for it's length, ideal for younger players or snipers that have to trek long distances. The vital shooting parts of the gun are reinforced with metal. Finally, AGM has included many accessories, like a speed loader and 2-point sling, so the gun is ready to use right out of the box.

verified buyer
L. PARISE | 2015-02-16
Product Information:
Fascinated by my friend's sniper rifle and with a broken M4, I decided to go down the sniper path. I knew that I shouldn't break the bank on my first new type of gun, so I bought this to test out sniping. I opened the box, and with some mildly easy assembly (a few hex-screws, nothing overwhelming), I had the gun ready to fire. I turned to my trusty Elite Force .25g's and fired at some trees and targets in my backyard. I was very impressed. Even without a scope, I was hitting the targets within a few rounds. After half an hour of messing around, I felt like I mastered this gun. It was very friendly for a beginner, like me, and even though it's been about 6 months since I bought this, it is still extremely trustworthy and has the same firepower as it did out of the box. The bolt is not sticky at all, the weight is light but not out of comfort range, and speaking of comfort, this thing is very nice to hold. The polished [fake] wood is a nice touch, and the buttstock (although it get uncomfortable after 5 or so minutes of holding it up) is nice on your shoulder. You can buy extra magazines for this gun (if you are playing long games) or you can do nicely with the 29 rounds already in one mag. During one game, I put on my friend's scope. I was hitting shots across the field in only a few shots, and I was hitting anyone who got close. I could drag on nice things about this gun for days, but I do have a few complaints, as you will see in the cons.

Cons:
Magazines can be bought separately, but are very cheap (bad plastic and spring), so a few are needed. I haven't experienced any jamming or broken mags yet, but I have had some close calls and one magazine feels like it isn't put together very sturdily.
Light, which I know is a pain for some people (honestly, for it being so cheap it doesn't matter)
Extremely similar to their MK96 AWP model. I'm pretty sure it's the same internals. This seems to be cheaper though.


Overall, the good beats the bad. Entry-level airsofter? Pro who's looking into sniping? Without a doubt, I'd say go with this. It's cheap, shoots good, what else do you need? Nothing beats pulling the trigger and hearing the guy say "Hit!" then they look around, expecting to find someone in the open, and finding nothing. Snipers are deadly, but not for everyone. Personally, I think I'm more of a run and gun CQB guy, but sniping is still enjoyable. Maybe you love sniping, maybe you don't. Either way, this is a great buy and your friends will want to test it out once they see how well it fires.

verified buyer
K. BOSTON | 2015-04-02
Product Information:
I purchased this gun a week ago and the mag broke within 3 hours. I called them to see if they could send me a free one and they had to send it to some committee to decide. They finally sent me one a week later. I could only do single shot for a while. I decided that I don't want the gun if the mag is going to break every time I use it. So I called them to see how to return guns, and they said when you touch it for the first time you can't return the gun. Not even store credit. The next thing is the scope. I highly recommend not getting the scope because it is impossible to align. I went to stores to get it aligned and it is still really of target! The gun may look awesome, and woodsy but it is actually not reliable...

Pros:
The Looks
The Price


Cons:
The Mag
The Scope
The Fps is not right. It Shoots 350Fps
No Sights
The Sling
The Speed loader

verified buyer
L. PARISE | 2017-06-10
Product Information:
I wish I could say good things about the gun, because it is one of the best low-budget sniper rifles out there, but I simply cannot because of one key factor. I'll get to that later.

The gun itself shoots fine. The velocity of the BBs has stayed the same since when I got this thing about 2 years ago. The hop-up is really easy to adjust, as it sits on the left side of the barrel. Inserting new magazines is so nice, it provides a super-satisfying click as it snaps into place. The trigger pull is just as good as when I unboxed it. One tell-tale sign of wear is the safety switch, though. It's right where the bolt sits when you've put it back into it's fire position. The safety switch is now a bit loose, so if you brush up against it when you pull the bolt back, the gun will go into safety mode. It's only a minor, annoyance, though. Onto the bolt: It's buttery smooth. Out of the box, it's well oiled, so you have no problem pulling the massive spring back into firing position. I re-oiled it once, probably about a year ago, and it still pulls back with very little tension. The ergonomics of the gun are pretty good. It is easy to hold since it is so light, but personally I'd prefer it to be heavy. On your shoulder, the gun isn't uncomfortable because the rubber buttstock is a nice touch (and a welcome enjoyment if you are switching from plastic/metal AEGs). Speaking of the buttstock, you can actually pull it off and have access to some storage space inside the hollow stock. I took some heavy pieces of metal and wrapped them in a rag and put them in the stock - the metal for extra weight to the gun, and the rag so that they don't bang around on the inside of the gun.

After 2 years and many outdoor battles, the gun has lost a bit of accuracy. Although the FPS has stayed consistent, my shots have a wider spread from when I first got the gun. Along with that, when I first got the gun, it wasn't even shooting accurately then, either. If you want to hit shots from more than 300 feet, this gun may not be for you. Even with a scope, my shots weren't hitting the same spots. I have a scope on it, and usually the BBs will stay at least within the view of the scope for 400 ft, but after that, it's pretty random. Even with no wind and no hop-up, it's impossible to compensate for where the shot will go. Now, despite the accuracy issue, it's still a really nice gun. If your target it on the move, or in the wide open, you'll probably hit your mark. Unfortunately, if it's only their head, you're more than likely going to miss.

The biggest issue isn't from the gun itself. It's the damn magazines. I bought 3 extra magazines. Even though they hold 29 shots, I knew I'd need at least one more, as I only play with about 8 other people, so every man counts and needs to get some kills. After 1 year, my 3 of the magazines I owned (out of 4 at this point) broke. These things are not durable AT ALL. One drop on the ground by accident and it's gone. And it's not like the plastic shatters or something, no. Usually, when you pull the bolt back after a few shots, all the sudden, you hear the BBs pour into the barrel, and suddenly, you have 20+ BBs in the barrell, which is extremely dangerous to the gun. I've had a few jams because of this. Luckily, these mags are quick to speed load, so the last one I have is enough as long as I carry a speed loader with me.

The mags may seem like a minor problem, especially since they are $6, right? No. I would not buy this gun again purely for this reason. It has been such a pain trying to unjam broken BBs after misfeeds, not to mention that a cracked BB could break your gun's internals! If that happens, you can send your $100+ down the drain.

Pros:
-Great FPS
-Silky-smooth bolt pull
-Good ergonomics
-Light, but you have the ability to add weight
-Held its ground after 2 years. Not too many signs of wear yet

Cons:
-The safety switch moves when you pull the bolt back sometimes
-Accuracy isn't too great
-THE MAGAZINES (read above if you haven't)


I feel bad for this gun. It would be so nice if it weren't for the cheap magazines. 5-star worthy at that point. But seriously, don't buy this gun. A friend of mine owns an L96 model that he says was around the same price range. It seems to have less problems than mine, and it has better magazines. And if you are truely serious about airsoft, do yourself a favor and ask yourself, "Do I really need a sniper rifle?" I didn't ask myself that. Most AEGs in the same price range shoot just as far and accurate and fast as a sniper rifle. Plus, with an AEG, you have the option of playing in CQB fields, too. I wish I bought an AEG as a new CQB field opened up right by where I live and it would be pointless to try and bring a sniper rifle there. Not only would you not be able to get kills, but its FPS is above the limit.

Talk about the AGM MP-001 Bolt Action Spring Sniper Airsoft Rifle (Imitation Wood) with your friends on the facebook comments box below: