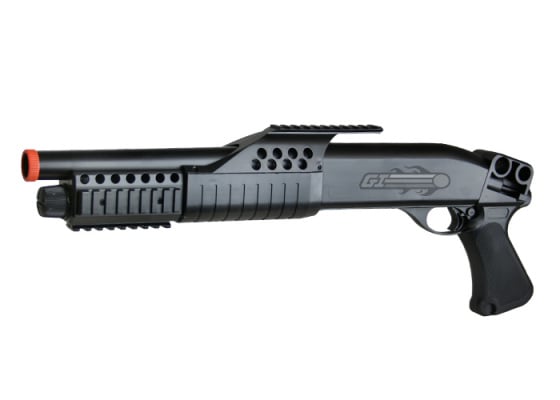 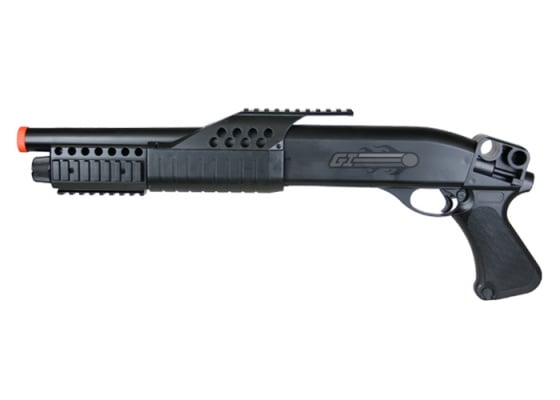 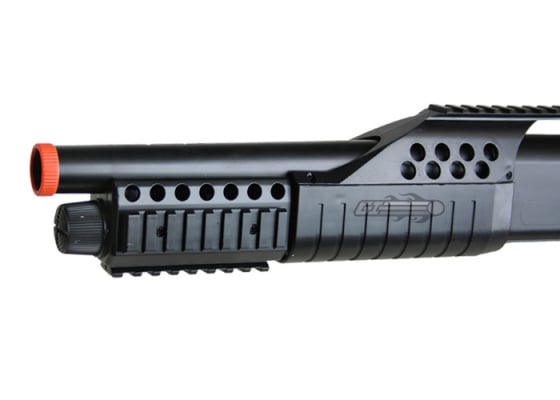 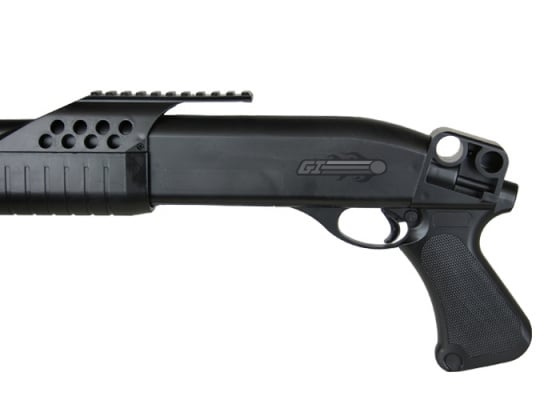 This new shot gun by M180A2 Pistol Grip Shotgun is great gun to have fun with your buddies. It is a shell fed pump action shottie, and the shells hold 14 bbs each. Also, the shells are compatible with Tokyo Marui shot guns.


Please Note:
Accessories included with this product are liable to change at the manufacturer's choosing.

verified buyer
A. WILLIS | 2014-03-27
Product Information:
I got this gun a a cheap secondary, I was fully expecting this gun to be of cheaper quality. I had done my research and had decided that I was able to live with the negative aspects of this gun. Everywhere i read said that this gun was made of cheaper material, and that the red dot sight was a piece of crap. Knowing this when i got it i simply didn't, and still haven't, even tried to put batteries in the sight. I still keep it for aesthetic purposes, but i don't actually use it. Also when i first opened the box the side rails on the front where both broken off, so i had to through them away, luckily however the bottom front rail seems pretty solid so i'm able to have both my flashlight, which works wonderfully, and my red dot sight which is just there for looks, on my gun. Another issue I had was that the shotgun shells for this gun are of much worse quality than the utg ones. they still work but sometimes bbs fall out and the spring comes out, but it's easy to put back in. But besides all of it's external downfalls it seems to work perfectly internally. So the actual functioning of the gun is really good, it should be noted however that I've only shot it a few times and haven't done any practical aiming or put it under very much stress yet. So over all i would say this gun is worth the price. The outside quality of the gun is as cheap as the gun, but unlike other crap guns that you can get at target it still functions fairly well. My suggestion would be to not worry at all about the red dot, but DO mount the flashlight, and buy utg shotgun shells. If you do that you actually have a pretty decent secondary.

Pros:
Firing works well
flashlight is nice and bright
lost of tactical rails so you can put real add-ons on
comes with a decent amount of shells
comes with a nice shell carrier

Cons:
Red dot sight is crap
even though there are a lot of rails they are mounted with really bad screws so they may come off
the shells it comes with suck compared to the standard tri burst ones(which are compatible with this gun)
slightly hard to cock
The external materials in general

J. FARR | 2014-04-19
Product Information:
Time to be honest. Look at this replica and consider what you will use it for as well as what you will need to use with it.

I purchased the same brand, but different model (not from ASGI), and used mine for years (maybe 3). I like it, but it in no way deserves 4 stars. Why?

There are great things about the ACM M180A2 in general. As others have said, its durable. The manner in which you receive it, however, depends on shipping & handling from all parties involved: wholesale, retail, shipping company.

If you do not like what you see when you open the box, then it falls on you and the retail to move forward since in all likelihood returns would be based on them and their policies. If the shipping company is at fault, I'd say work with retailer in order to straighten out the issue (good retailers will work with you. maybe not act like a lawyer but will help in any way they can).

Let's move on since I'm reviewing the Shotgun. My replica came in perfect condition. no broken parts, it was fine. so out the door I went to try it out and a few days later, onto the field. Using the fore-end was tough. I like there is some effort involved in using it. When my adrenaline is rushing, I don't want to break what I bought during normal operation. This is part of how durable the replica is. The issue is with the grip however.

The fore-end is smooth, which caused my hands to slip. This may be avoidable with certain gloves, but I did not have any during the time. This caused me to strain each time I tried to cock it. okay first few times, but in a jam and doing it several dozen times a round will get tiresome. the fore-grip (unlike the franchi) is not designed with your hands in mind. there is no curvature or grip added to it.

If you take off the top rail for sights, etc. it looks a little cool, but is worse. it can be done with screw drivers, Philips, but don't. it opens a hard sharp edge to the fore-grip. So keep in mind that is there. For me, I hit it against many things and that's why I say, its durable. However, rubbing up against things (including clothes and packs) is not pleasant. why I stated above, consider what you will use it for."
If you are wanting a fun secondary, possibly could fill that role. So here is the second part of the second sentence at the top.

There is no place for sling. Not for mine at least, and I don't see one here nor on the others. I made my own which has worked. Used the fore-grip on the front and trigger guard. Had to use smaller clips. If I didn't want the fore-grip, I tied the the sling around the barrel. I'll use rope too. It helps for my look, but might not for you. Oh, and I used mine as a primary.

Despite my 2 star rating, I am happy with my purchase, though I am now looking for something better. consider what you are buying and either make it work, or get something different.

Pros:
durable (mine was)
fun to use
cheap (if you know what you're getting)
rails (in the front)
shotgun shell magazine

Cons:
Fore-end grip
top rail can get in the way
extras are unnecessary (and add to the price)
no place for slings

D. SCHAIBLE | 2014-04-21
Product Information:
I got the ACM M180A2 in a mystery box. it's hard as ** to pump it especially since mine was basically droned in silicone oil. the shells for mine held 5 at best, otherwise they would all fly out of the shell. at first i thought the red dot was broke but was EXTREMELY dim, after making the hole for the light on the red dot bigger i could barely see it in dim lit conditions and the tactical light's batteries lasted for about a total of a hour of use before the light was too dim to use. both of the attachments use the crappy little watch batteries too which cost me about $5 for three when i keep an entire jar of AA and AAA around the house. so i bought longer screws for the mount and mounted my fancy heavy duty mini LED onto it. I ended up just selling it to a friend for $23 and 4 cans of mountain dew.

Pros:
cheap
rail space
that's all i have to say about that

Talk about the ACM M180A2 Pistol Grip Spring Airsoft Shotgun (Black) with your friends on the facebook comments box below: