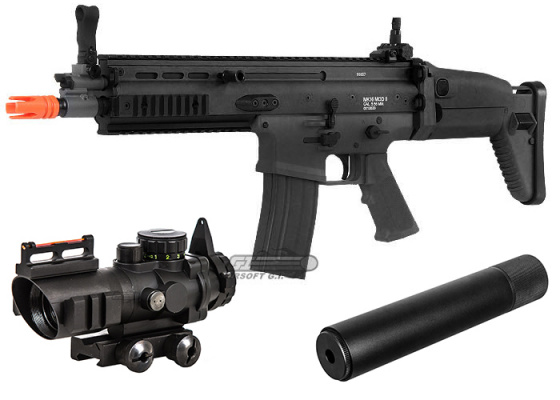 ( 1 Reviews ) ❤ Add to Wishlist
OUT OF STOCK
(notify me!)
Free Shipping for orders over $89 No Coupon needed

Description:
The VFC MK16 is the latest and possibly the best replica of the MK16 currently on the market. The VFC MK16 maintains many of the same features and controls as the M4/M16 series, so the transition for users is simple. In addition, the MK16 has many improvements over the M4 and the M16. The lower receiver is constructed from sturdy polymers to reduce weight. The the magazine release and selector switch are ambidextrous, and the bolt release is functional. Not only is the stock retractable it is side folding and has an adjustable cheek rest. Unlike the Classic Army the wires are not exposed when the stock is folded.

The most drastic changes have been made to the upper receiver. The delta ring has been removed bridge the traditional gap between the handguard and the upper receiver. An integrated and uninterrupted rail runs along the top of the receiver giving the user plenty of room to mount optics and night vision equipment. In addition, there is a rail on the underside of the handguard and two removable rails for each side of the handguard that enable the user to mount accessories like a flashlight or vertical grip.

D. DEWHURST | 2019-03-01
Product Information:
Bought the tan version of this kit back in 9/2016 as my second AEG and something a little better then the AUG that i bought as my first AEG. Just the stock version works pretty well out of the box. As i played with it more i started to see things that could be upgraded. The range out of the box is alright for smaller fields but there is room for improvement. My biggest gripe with this is the folding stock. Not the entire stock just the plate that holds the stock to the body of the weapon. The design for how it holds isnt the best after a few months of playing with it the plate broke. The replacement plate broke after two days of play. I really want to give this weapon a higher review but the fact that you have to keep replacing the plate drops the score down quite a bit as it is not a smooth process to replace it.

Talk about the VFC FN Herstal SCAR-L MK16 CQC AEG Airsoft Rifle (Black) Kit Up Package with your friends on the facebook comments box below: