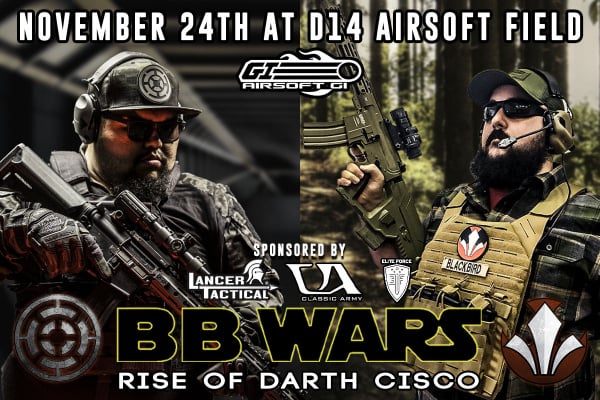 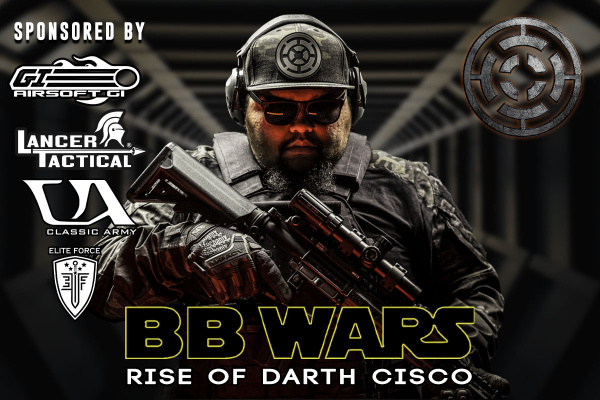 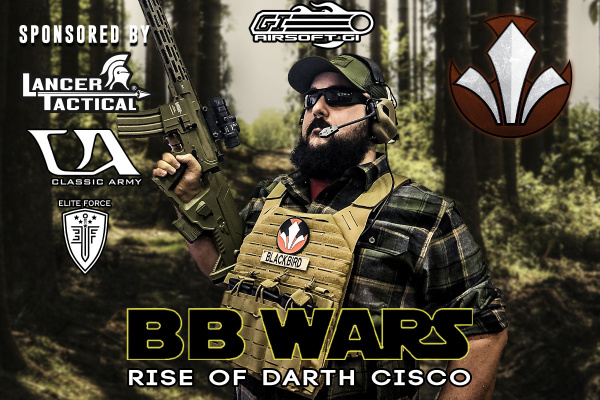 Write Review
Excluded from Coupon Codes
OUT OF STOCK
(notify me!)
Free Shipping for orders over $89 No Coupon needed

Make sure you stock up on cheap airsoft deals for this event! There are plenty of affordable bundles to pick up in time to give you and your team the tactical advantage! Click HERE.

What is BB Wars: The Rise of Darth Cisco?
This is the next installment in the BB Wars event series, pitting the forces of the rebellion against the mighty Empire and it's superior weapons of war. In these games, the actions your squad completes during gameplay help influence the future scenarios you will play throughout the event and into subsequent events during the year

Game Description:
As the ever constant battle between the Rebellion and the Empire rages on, the landscape of war has changed yet again.

Facing a crisis of conscience over the Empire's new weapons of mass destruction, The undefeated Commander Blackbird has defected to the rebellion, lending his wealth of knowledge about the enemy's plans and resources to their cause.

In this void, the Emperor has chosen his own personal apprentice, Darth Cisco to rise and take leadership over the Imperial forces as they prepare for another showdown at the fated District of Delta 14. The Empire is in Chaos following such a grand betrayal, and Darth Cisco will be the one to finally bring it to order.

As Blackbird takes command of a tired and under-supplied rebel fighting unit, he realizes what they truly need is another victory against the Tyrannical forces of Darth Cisco and the Imperial legion to boost waning morale.

Will another one of Blackbird's wild schemes be enough to defeat the empire? Will Darth Cisco be able to match wit with one of the Empire's own, and an undefeated commander in Commander Blackbird? Only you can decide the fate of the galaxy at BB Wars: The Rise of Darth Cisco!

What's New?
This game will feature a brand new Imperial commander, while the roster of command staff staples rotates to give players a chance to mix things up! We'll be introducing some new scenarios, with other fan favorites but keep your eyes peeled and ears open for new FRAGO missions, dynamic objectives and be ever vigilant for a battlefield full of enemy combatants ready to win the glory for their side

Event Schedule*:
Registration will open at 8am. Please arrive early, and have your waiver completed ahead of time. Games will commence when majority of players are through registration. A hard break for lunch will be given after scenario 2. Raffle time TBD.

*PLEASE NOTE Schedule is subject to change without notice

Melee kills - These are allowed and encourage, however, melee weapons must be made out of foam or soft rubber. They can have plastic cores but be covered with foam for safety purposes (Example: Plastic ninja sword covered with foam or homemade foam sword)

Hard Respawn - This is a respawn location that is not mobile. Players may come back and tap this location to immediately re enter the game.

Mobile Respawn - This is a flag that can be moved around the battlefield by the controlling team so that friendly players may respawn. Once the flag is under fire, players may no longer respawn there and the flag must be moved out of the line of fire in order to be used for respawn. These flags may be captured by the enemy team.

If at anytime we feel a player does not have the capacity or inclination to play safely and responsibly, that player will be escorted off the premises. These rules will be enforced for your safety.

New to Airsoft? BB Wars is a fun way to get into the sport and enjoy airsoft with friend and family!

See an unfamiliar term being used in the airsoft industry? We have got you covered with the The Official Airsoft Glossary to keep you up to date!

Check out more information on what products are currently gaining attention in the marking on our post:

Talk about the BB Wars | The Rise Of Darth Cisco | Sponsored by Lancer Tactical, Elite Force, Classic Army USA with your friends on the facebook comments box below: