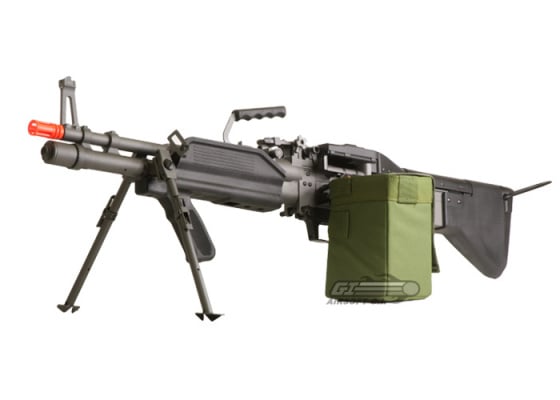 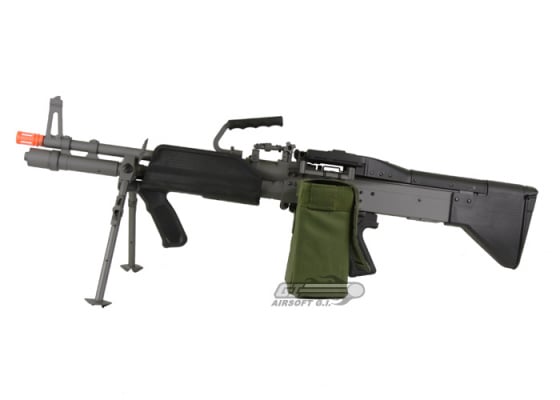 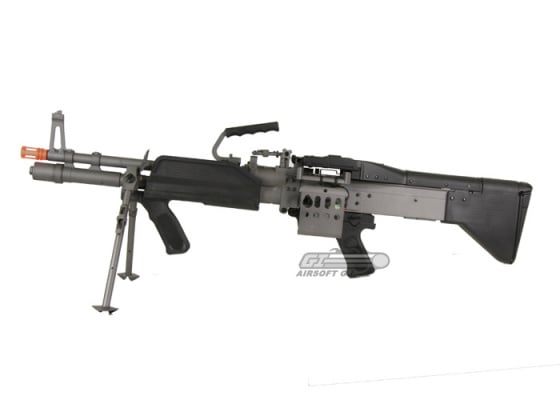 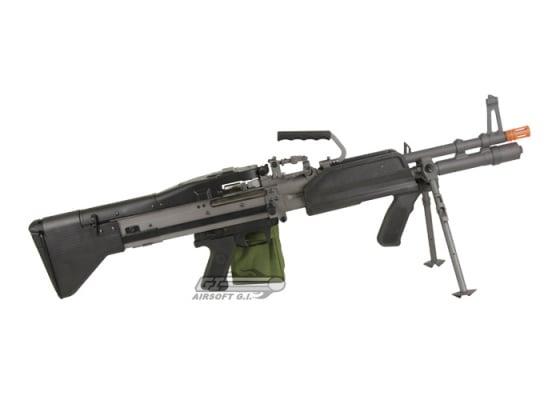 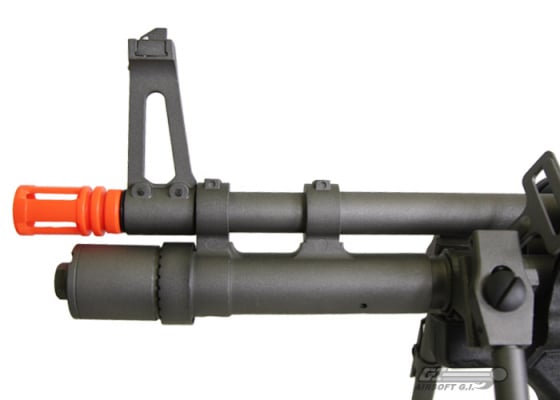 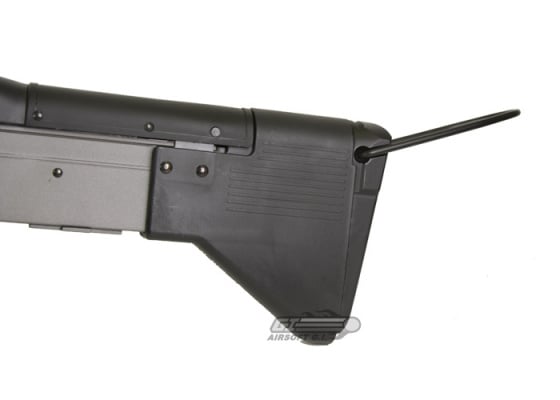 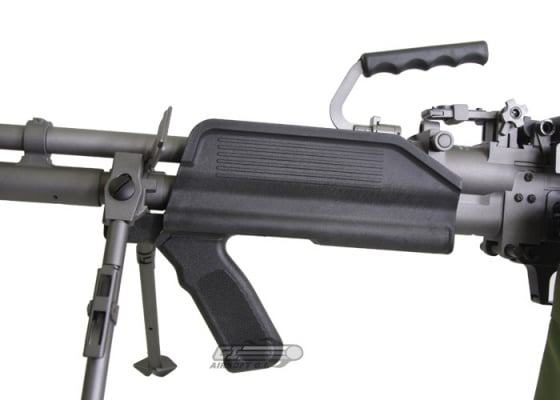 ( 15 Reviews ) ❤ Add to Wishlist
Excluded from Coupon Codes
OUT OF STOCK
(notify me!)

Descriptions:
The M60 Machine gun has seen service with the United states Military since 1957 and is most famous for its use by G.I.s in the Vietnam War. Since that time it has been adapted for use all over the world with countries like Australia, Columbia, Taiwan, and South Korea. Although there are numerous newer designs that are in use with the military the M60 has seen combat in the Gulf War, Afghanistan, and Iraq.

The MK43 has been modified from the original M60 design in order to update its capabilities for modern combat. The standard hand guard and receiver cover of the M60 has been replaced with a vertical fore grip hand guard. In addition the barrel has been shortened and the bi-pod has been attached to the receiver for more stability.

The A&K MK43 is an excellent example of A&K's ability to step up and put together a great gun. It is built almost entirely out of metal and A&K added to the realism with their auto winding magazine that only turns on when the trigger is pulled. Another great touch added to this gun is the rate of fire controller, this gun can be adjusted to shoot anywhere from 12-20 BBs per second. This M60 is an excellent addition for collectors or anyone looking for a support machine gun.

verified buyer
J. KURIYAMA | 2014-02-21
Product Information:
I've had this gun for some time and played a few games with it. So far its been a great gun with some minor issues. Currently using it with the Turnigy 5000mAh 2S1P 7.4v 30C hardcase pack which works great but had to get a converter from bullets to deans and solder on some deans to the gun. Never had to worry about recharging or reloading the gun. While the fps and rof may not be first class, I find it's strengths in its adjustable ROF for when you want to conserve ammo or spray down suppressive fire and the large magazine.

As for some advice, get a nice big durable battery like I did because it will be sitting in that mag pouch with the mag box and it will get banged around a bit. Also get a sling, the gun itself has 2 nice slots for one on the front and end of the gun and weighing 10-15lb you'll tire out carrying it around.

Some of the issues I've encountered with the gun is that the flash hider is a pain to get off. The magazine pouch can shift around depending on how tight you make the fabric straps that attach the pouch to the gun. Sometimes the battery shifts and can hit the mode switch on the magazine causing it to go from auto-wind to continuous-wind in the middle of a game (which could probably be solved by sanding it down. Also the auto and continuous labels for mine was backwards). Another thing is the handle on top isn't good, I wouldn't advice using it for more than just picking up the gun because it jiggles a lot and looks like it could snap easily. The hop-up is difficult to adjust without first loosening the front barrel and shifting it forward a bit, but you shouldn't need to adjust it more than once. Another thing is the hose that attaches the mag to the gun is twisted on and is impossible to take off without spraying BBs everywhere while the mag is wound. The gun side of the hose can also become loose alloying it to shift and be pulled out slightly.


Cons:
Weak Handle
Magazine is a pain to take off (but can be refilled while attached)
No fake bullets (battery wires would get in the way anyway)
Somewhat loosely attached magazine pouch
Heavy (not ideal for run and gun)

T. JONES | 2014-03-25
Product Information:
I got this gun discounted for $275, but even at $330, this is still a good value. The rate of fire knob works wonderfully and the fore grip is a nice touch. I tend to switch hand position from the grip to the receiver when my hand is tired, so this attachment is nice. I had to get it returned once for a cracked stock, and even my second gun is a little tight on the center, getting the gearbox out not quite as easy as it should be. The front sight on my gun is a bit crooked, but fixing it just requires adjusting the outer barrel. Just take it out and put it in right. Super easy. The carry handle works just fine, just make sure to tighten the screws on it once in a while; they tend to come loose. The box on the left side can be a bit awkward, but I have long arms, so it's not a big problem for me. Overall, a good bang for your buck if you're looking for an LMG.

Cons:
-placement of ammo box
-crooked front sight
-gearbox a bit difficult to pull out
-had to get replacement (see info)

M. SOSNOWSKI | 2015-06-09
Product Information:
This gun is really nice when it works, has a great rate of fire and decent range if you know how to work a hop up, however the wiring and trigger system is a night mare I'm on my third trigger switch with this gun. Basically what happens is your gun will never stop firing when you pull the trigger, I've replaced it myself and had it done by a local shop and both times within a few months of it being replaced it happens again. Oh and the safety doesn't work very well.

Pros:
It would be great in every way except for the trigger being a piece of shit

Talk about the A&K MK43 AEG Airsoft LMG (Black) with your friends on the facebook comments box below: