After playing for some time, and if you didnt take the tech route to upgrade your starter gun, you find yourself looking at purchasing a high-end gun to, potentially, be the best performer youve handled to date. Similar to picking your very first gun, it seems like theres a limitless number of selections but we are looking to narrow it down a bit. Us here at Airsoft GI, and in partnership with Major League Airsoft, we have selected our Top 5 production AEGs that are priced at over $300 USD. In order to qualify the gun has to be readily available in the United States and it cannot be a built to order type. So no high end customs and no Tokyo Marui.

The G&G TR16 G2 features a 16-inch barrel and a 15 inch MLOK rail. Externally this gun features the great external quality G&G has brought to market in the last few years. During the testing portion, the model that we had on hand was completely unresponsive when we plugged the battery in. The motor connectors were on but there was absolutely no response from the gun what so ever. For that exact reason we could not move it above number 5.<

The KWA Ronin 3 was without a doubt the most fun gun to use in the entirety of the testing. With the 3.0 gearbox, the Ronin features a recoil system gives you a felt response every time the gun is cycled. You could imagine when firing on full auto it is loads of fun. However, we did find that the KWA does have a small break in period for the bucking and that heavily affected the results of our range test. After coming in last, for the functioning guns we had, in the shooting portion of our testing, it placed fairly high in the Internal Features as well as External quality. Due to the break in period hindering straight out of the box performance, we were unable to place it any higher than number 4. 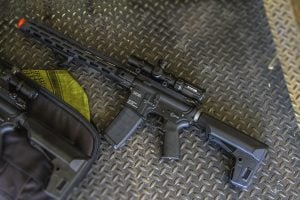 Now before you all bounce off the handle, yes, the LVOA is priced at $425, but the barrel length is as close to the rest of the contenders. We easily couldve used the SPR but the extra 4 inches of barrel wouldve given it an unfair advantage and we wanted to keep it as even as possible. The externals on the Krytac are great. They have an incredibly clean finish, full Warsport trades that would come on the real one, and out of the box you will also receive black metal flash hiders for any model that you buy. Rounded out with really good performance and a solid internal build. The biggest downside of the Krytac us the gearset. Due to the Gearbox walls being thicker, it forces you to use a thinner gearset and it isnt truly Ver 2 compatible. During the range test it didn't stand out vs the other guns we had tested. For that reason, the Krytac LVOA gets our number 3 spot.

The new kid on the block, our selection for number 2 is from Classic Army. At one point you either bought a TM or you bought a Classic Army. With a lot of revisions to the internals Classic Army is taking some major steps to standardize what a premium end gun should be in 2018. Internally, the LX-13, and the entire Nemesis and Scarab line for that matter, feature the ECS trigger system giving you the best trigger response of all the guns tested. Additionally, the Classic Army does also come installed with a 6.03mm Tight Bore Barrel giving it great range and accuracy. Externally the Classic Army was the most well rounded of the group as well. A beautiful MLOK rail, complete ambidextrous controls, and the new BAS giving you massive battery space, rivaled only by the PTS Enhanced Polymer Stock that comes stock on the KWA Ronin. Performance wise it was neck and neck with the Krytac and our number one choice. The only thing that kept the Classic Army from being our top pick was the slight hinderance on upgradability. The hop up unit is slightly different vs a standard M4 hop up unit. As well with the gearset you have to move the magnets over from the original gearset and that may require some modification that some techs may not have access to. Leaving the Classic Army LX-13 at our number 2 spot. 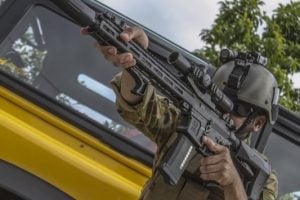 Our number one pick for the best AEG for under $400 has been given to the Elite Force Avalon series by VFC. With fantastic external & internal quality. Full upgradability and high performance, this stood out to us and Major League Airsoft as the top pick. In terms of externals, the dexterity and comfort that is provided by the QRS furniture was able to give it very solid standing over the Krytac and G&G. Internally the Avalon gearbox features 8mm ball bearings, stainless steel 16:1 gear set, quick-change spring guide, and an inline MOSFET housed within the gearbox. VFC has switched the material used within their polymers to make their Tappet Plate and Piston much stronger and are no longer required to immediately change out. The Avalon features a true, 100% Ver. 2 design, allowing the user to swap out any part at will. When it came to performance, the Avalon was not going to be out classed by any of the guns in the testing. With consistent accuracy at all ranges it was the most consistent of the 4 guns tested. The Avalon series comes in 4 different models, all in black and bronze that do also come with a 1-year warranty this is covered by us here at Airsoft GI. Placing this beast at number 1. 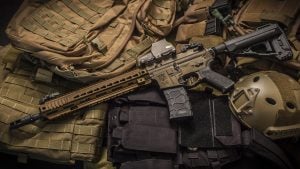 Regardless of which of these you go with youll have a great experience. Even though the G&G was not working they are taking care of it and getting the issue resolved. All of the guns come with a minimum 60-day warranty and are all spoken of highly within the community. If you feel differently we openly welcome you to try and change our mind about the number 1 pick.