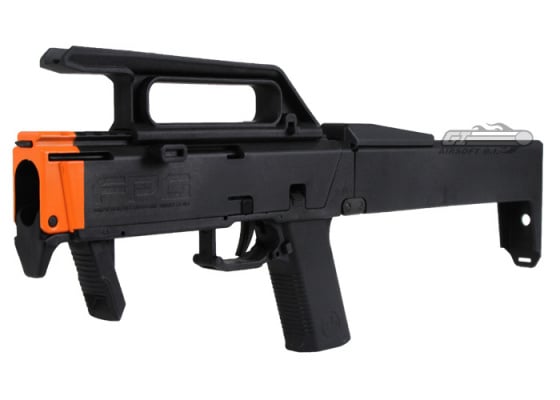 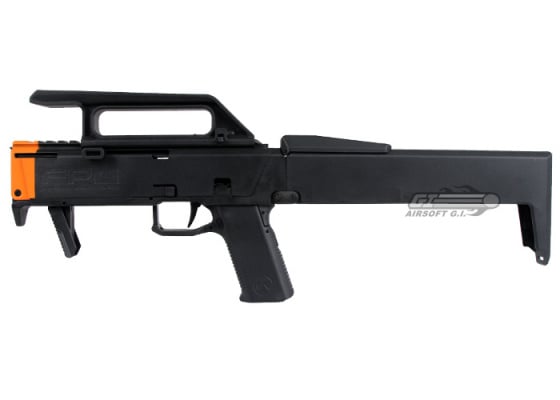 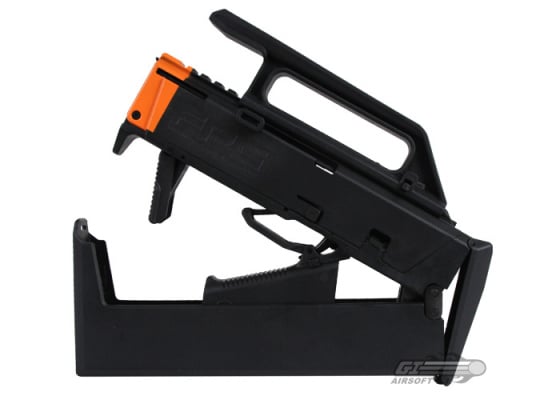 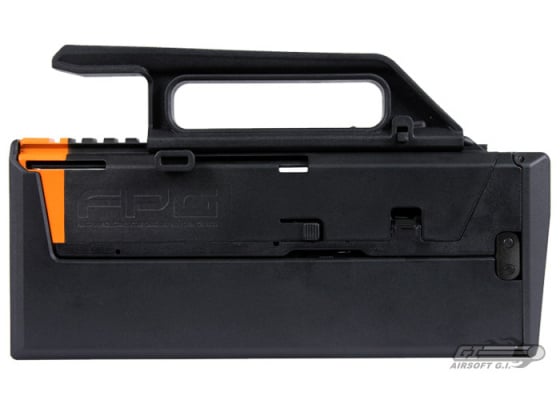 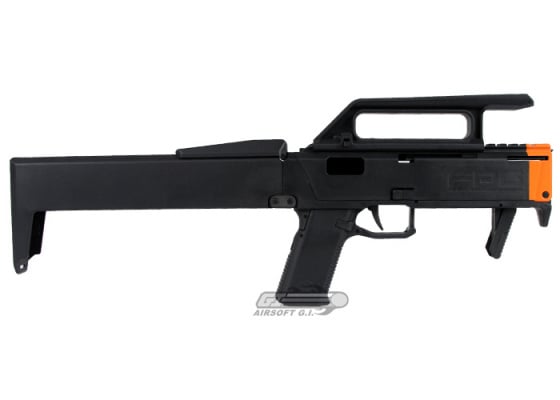 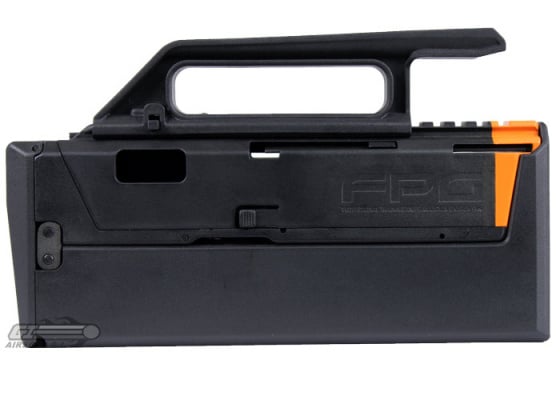 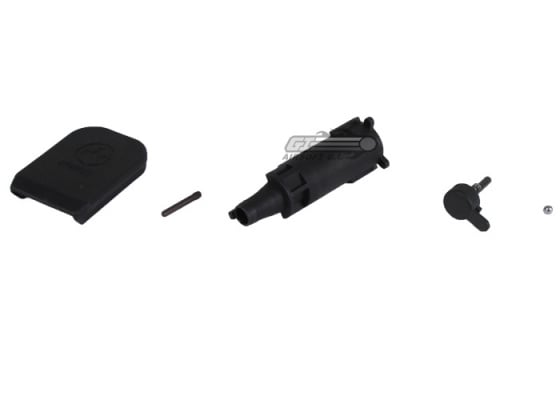 The MagPul PTS Folded Pocket Gun (FPG) Kit has been a long awaited release into the airsoft world. This kit almost exactly replicates the real FPG, something that Magpul will never commercially produce. The polymer used to build the entire kit is very strong with the same densities and textures of the real FPG. The FPG is designed to be an ultra-concealable personal defense weapon for military and law enforcement. This PTS FPG brings Magpul's flawless designs to meet with KWA/KSC's impeccable airsoft reputation together. The result is a unique, powerful, and reliable airsoft gun that will never go out of style. This kit features a 20mm top rail for mounting accessories, or the included carry handle, the carry handle acts as a light shield when in place. With the carry handle removed and with the FPG folded up it can fit into most front and rear pockets of averaged sized male denim jeans. Included with this kit is a reinforced blowback chamber and special slim fire selector. Not included is the KWA/KSC G18c slide or magazine, but when all of these things are brought together the results are fantastic!

E. POLITZER | 2010-05-06
Product Information:
This kit is based off of the real FPG by MagPul. Like the real FPG, the PTS version is an enhanced G18C frame. It requires a donor slide, just like the real thing. Now, if you're lucky enough to have the slide hanging around, you're in for a treat, but if not, it may be difficult to get your hands on one. This is because KWA discontinued the G-series, due to an ongoing settlement with the real steel company.
That said, I happened to have the required slide hanging around, and I really like the FPG, so I purchased the PTS version. The slide requires slight modification in order to install it into the FPG. You must remove the sights, replace the stock nozzle with a reinforced one, and replace the stock fire selector with a slim one. The PTS FPG includes instructions on how to do all of this, which is handy if you don't know your way around the pistol. Also included is a smaller magazine base plate for the extended magazine so that it will fit inside the FPG while it's folded. The PTS FPGs are individually numbered, which I think is pretty cool.
As for build quality, I think it is excellent. The plastic does have a slight bit of flex in the stock, but hey, you aren't supposed to squeeze it. The stock has no noticeable wobble with the weapon shouldered. The PTS FPG unfolds nice and snappy, and everything locks into place nicely. Overall, I think the PTS FPG is well constructed and solid.
Now, onto performance. The first thing I noticed was the recoil. Even though it's the same amount of recoil as the pistol before conversion, it was quite a bit more noticeable than before. This is probably because of the increased amount of contact points you have on the weapon. Rather than transferring all of the recoil energy into your arms, it's now also going into your shoulder and your cheek. The increased amount of contact points also yield an increase in accuracy, because you can hold the gun far more steady. I can reach out and hit somebody at 100 feet no problem with a couple shots or a short full-auto burst. That's not too shabby, considering it's technically a pistol. I'm sure the range would be excellent with a precision barrel installed.
The MagPul PTS FPG is a very fun gun to play with, and I feel that it was money well spent.

Pros:
Solid construction
Easy to convert G18C slide (May be a bit daunting to a beginner, however)
Felt recoil - It feels amazing to fire this weapon
Folding ability - It's just plain old fun to fold and unfold this thing!
Compact - This thing folds up nice and small, great for concealment or storage
Extended range - The range is pretty decent, and I imagine it would be great with a precision barrel.
Loud - It sounds very cool when it is fired, and I suppose it could be intimidating
Fun to play with

Cons:
Price - It's a bit expensive, but if you have the money, I'm sure you'll be happy with your purchase.
Needs donor slide - It may be difficult to get the slide if you don't already have one
No extended outer barrel - The real FPG has an extended outer barrel which looks cool, and I wish the PTS FPG had it too, but it's no big deal.
Orange tip - It's pretty big and ugly. I don't mind it much, but it can be removed with some non-acetone nail polish remover, some q-tips, and a lot of patience. Be careful not to leave the nail polish remover on for too long, as it may damage the plastic.
However, remove the orange tip at your own risk, as it may damage the gun or void your warranty!

B. CABRAL | 2010-09-28
Product Information:
This gun is AWESOME! Got this for my side-arm, but it acts like an assault gun/ primary. I love this gun, especially because of the whole kit and things. Also because it is portable and you can bring it mostly anywhere!


Cons:
No extended mag
Mag is too short
No slide included

I lOVE it though!
(You'll keep it for the rest of your life if you get the slide and 2 extended mags, with the one that comes with it already)
Search Tags: M17 M18C GBB Pistol
People who bought this item also purchased:

Talk about the PTS Magpul Folded Pocket Gun (FPG) Kit with your friends on the facebook comments box below: