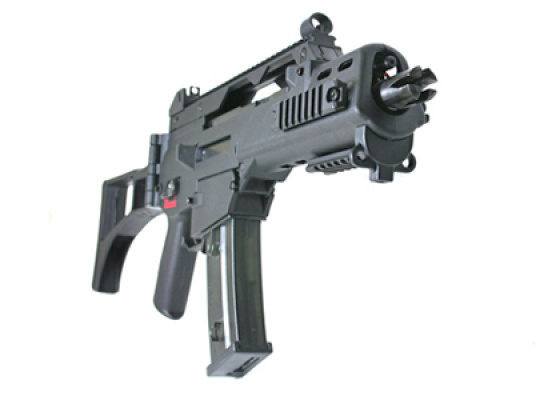 ( 18 Reviews )
Free Shipping for orders over $99 No Coupon needed

The Classic Army G36C sets itself apart from other airsoft versions of the G36C. The first and most noticeable feature of the CA G36C is that the outer body sturdily constructed of fiberglass and ABS plastic giving the Classic Army a look and feel that other brands are unable to match. The G36 has a side folding stock for extra maneuverability in woodland and CQB scenarios. Also, for extended ranges the G36C features a railed carry handle that can be used to mount red dot and magnification scopes. Classic Army also offers rails along the hand guard, something most manufacturers don't, that can be used to mount accessories such as flashlights, lasers, vertical grips, etc. This airsoft gun is a must buy for any fan of the G36.

M. ROBSON | 2009-08-04
Product Information:
classic army G36c
I have had this gun for about 5 years now and still running good today. The spring has been broken in and it is shooting about 295 fps steady. The stock barrel + hop up are fantastic. However i replaced the barrel with a mad bull 6.03 some time ago, after a short RMA call I got a better one (since the one i got was garbage and made the shots worse than stock) . This thing also shoots CRAZY FAST with a 9.6 battery.

cant say enough good things about it, so many things to cover...

Cons:
Ill be frank and honest about the cons for you...
Plastic hop up chamber with NO METAL REPLACEMENTS - hop up chamber works good but I broke mine just taking it out...
Smaller ratio build than other company's - VERY LITTLE ROOM FOR BATTERIES, i almost cried when i first got it and my only battery wouldn't fit in the stock.
Magazine - its cool and clear, but the little locking lip breaks after very little use. not a big issue but its annoying as --

J. KOLKER | 2010-01-27
Product Information:
I've had this gun for about a month now, and I would have to say that I am very satisfied with my purchase.

The gun has proven itself to me multiple times at my local airsoft field and in my backyard. The CA G36c has very good accuracy and shoots ridiculously fast. Additionally, this is probably the perfect AEG for CQC as it has the nice feature of a folding stock. Another thing I liked about this was its weight. It had a good heft to it, weighing in on my scale at 12.57 lbs.

However, there are a few problems, the main one being the battery insertion process. Let's just say it takes a lot of patience to put that little bugger in there. Also, the fire-selector switch is a bit difficult to operate. I've had situations in matches where I'm not sure whether or not the gun is set to Safe, Semi, or Full Auto.

In terms of the internals, I do not know much about it. But from what I can tell, people seem to be giving CA a bad rap when the internals seem perfectly fine. Oh well.

But in short, if you asked me whether or not to purchase this gun, I would most definitely say, "Buy it!" The pro's on this gun really outweigh the con's. You won't be disappointed.

Cons:
No functional bolt catch
Difficult to insert battery
Fire-selector switch does not make a solid click when moved
Requires allen key to adjust the sights

G. HODGKINS | 2010-02-15
Product Information:
i have had this gun for a few months now and let me say i am very satisfied. this was my first legitimate airsoft gun besides my pistol, before this i have had a galaxy mp5k, a couple of shotguns and pistols. but now all i use is my g36 and my kjw m9. the review scale says this gun sucks but in actually its amazing. the internals are very good and the only thing bad about the internals is the fps but i can just get that upgraded for a few bucks at my local airsoft store. externally this gun is very good also. they claim that it is made of fiber glass which might be true because there is no way this thing is plastic. overall this gun is really good and it is worth the money. one other thing is that ca says you should use ans 8.4 volt battery but screw that. use a 9.6 its fine dont worry about your fuse burning out any time soon considering this gun is 300 dollars. BUT ITS WORTH EVRY PENNY

EASIEST HOP UP IVE EVER SEEN

Cons:
SELECTOR SWITCH CAME OF THE FIRST DAY I GOT IT (MY FAULT I THINK)

HEAVY AT FIRST BUT YOU GET USED TO IT

Talk about the (Discontinued) Classic Army 36C Airsoft Rifle with your friends on the facebook comments box below: