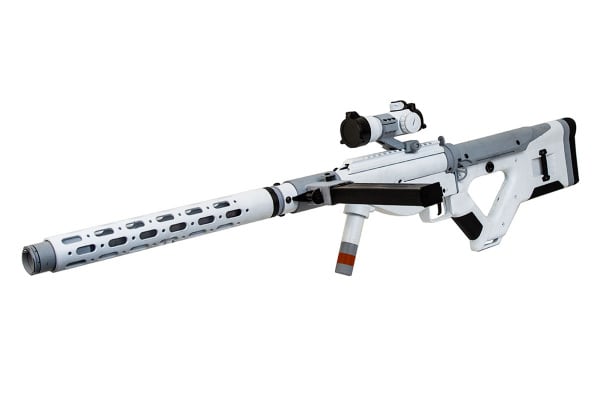 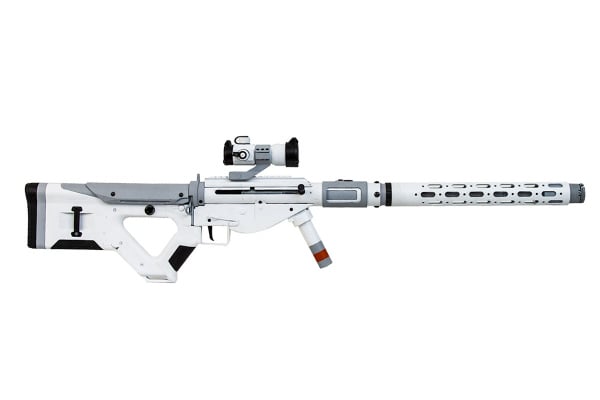 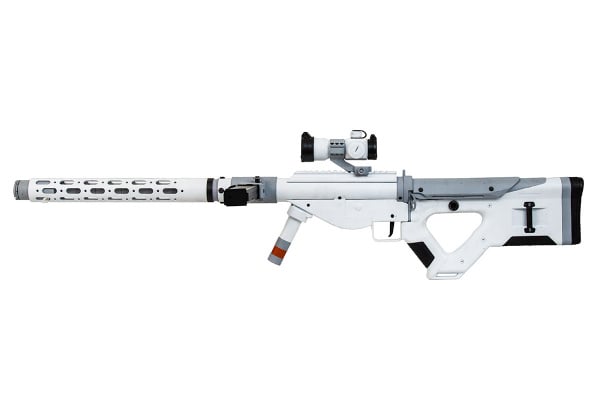 Conquer your foes with this accurate blaster

The XF-12A is an experimental repeating blaster manufactured by the Sonn-Blas Corporation to fill a need for anti-armor capable multi-role blasters to be deployed without the need for specialized troopers. Currently in testing phases with First Order Elite Troopers, the blaster employs a radical combination of old and new technology....

Most common blasters use energized plasma particles to neutralize or disable targets. With lethal accuracy and blazing concussive force, these type of weapons are notoriously effective against personnel and light armor. However a major drawback is that the energized plasma is easily countered by magnetic seals and deflector shields as well as being deflected and, in some cases, even reflected by the plasma blade of a lightsaber or other conducted-energy weapons.

Slugthrowers were weapons that used an explosive chemical to launch a solid projectile (a "slug") at high velocity. Slugthrowers were often looked down upon due to their use of projectile ammunition following a ballistic trajectory, resulting in the shooter needing reasonable amount of practice to accurately utilize the weapon. However, they remained popular for the unique advantages they offered. A slugthrower could be silenced, while a blaster usually could not. Slugthrowers were surprisingly useful against lightsabers, as when a slug made contact with a blade, it simply melted instead of being deflected like a blaster bolt. These melted embers could then fly toward the face or hands of the lightsaber user, and harm them if they were not careful.

Utilizing energized plasma beams to 'pocket' HE(High Explosive) slugs within a hardened case, the XF-12A Blaster rifle combines these two weapons technologies to devastating effect. The energized plasma serves to disrupt shields and magnetic seals enough to allow the slug to pass through to impact the intended target. The plasma bolt burns or melts through thick armor plating carrying the HE slug into the target. Once through the armor, the slug detonates sending fragments of the hardened case to tear through tissue as well as ricocheting inside the armor. Even with the limited amount of explosive inside the small slug, the blaster more than compensates with its impressive rate of rife. Testing shows that a lightsaber's blade is still unaffected by the plasma but causes the slug to detonate upon contact, sending shrapnel to disrupt or disable the user.

True to its multi-role objective, both features can be used independently to satisfy mission and target constraints. The blaster can use its energized plasma in a controlled fashion, retaining the "stun" and "sting" of the previously issued F-11D Blaster rifle. Conversely, if the energy portion of the weapon is disabled due to a planet's hostile or humid environments(as would be the downfall of most blasters) the slugthrower function of the weapon can still be utilized with the specialized HE slugs, standard or riot control slugs.


Fear not, this Custom XF-12A Blaster AEG Rifle is built with performance in mind along with its aesthetically pleasing build. Missing your shots? You shouldn't be missing the majority of your shots with this beauty withing your hands! The custom airsoft gun is based on a AGM MKII Sten that has been masterfully transformed into the XF-12A Blaster. These key features include the real steel handguard, amplifier flash hider, stock, optic, and custom paint job. The parts have been fitted onto the body of the airsoft gun securely to ensure a reliable platform to take onto the battlefield with you. Internally, there is a new motor, bushings, nozzle, gear set, spring guide, and MOSFET that have been installed to keep the longevity of this airsoft gun thriving throughout the many years of its life. The fine tuning of this blaster can definitely reassure your confidence on taking out the rebels you encounter. On the top, you may have noticed the rail section that hosts the red dot sight. This top RIS section has been mounted and screwed on so that it will stay in place. The package also includes instructions on accessing the battery location and hop-up adjustment. Lastly, this model will come with a J-Tech 1000D Cordura Large Carbine Carry Bag to help carry this rifle onto your next mission. Make your move with the Custom XF-12A Blaster AEG Rifle helping you take out whatever comes your way!

Talk about the Airsoft GI Custom XF-12A Blaster Rifle AEG Airsoft Rifle with your friends on the facebook comments box below: